- November 21, 2013
In perfect world, I would listen to the quiet sounds of jazz music while I prepared a nutritious evening meal.  My children, numbering three, would each take a specific task to help organize our dining experience: one would get the plates, one would arrange the silverware, and the third would place perfectly folded napkins next to each setting.  My husband would put down the newspaper and join us at the table for a healthy dose of food, laughter, and family time.
But in reality, we spend 50% of our time eating from a paper bag before or after a sports or music practice, 30% of the time grabbing some sort of leftovers and shoving them in our face as fast as possible, 20% eating so late we are exhausted and staying awake is the main objective, and 10% of the time actually attempting the family dinner meal.
Of that measly 10%, 90% of the time someone forgets the napkins.
I usually get blamed, as mothers often do, and so I leave my warm food to gather them from the cupboard.  And every time I do this, I find myself going through the same motions.  I pick up a large stack of napkins, and flip through them to count: one, two, three, four, five.  One for each member of my family.
But it wasn’t always like this, of course.  When I was growing up, it was just my mom and dad and I and our napkins numbered three.  When my husband started joining us more and more for meals, suddenly the number became four which was but a temporary increase, because soon enough he proposed and we married and I began setting the table with only two napkins.
Soon after that it was three.
Then four. 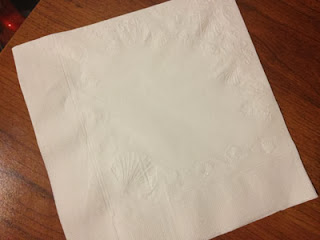 Then five.
And I know in my heart of hearts, that despite the picky eaters and food battles, the spills and the seconds and requests for a bowl of plain noodles, I love counting out those five napkins.  Even if it’s a leftover night standing at the counter and not a roast chicken with homemade mashed potatoes, five napkins are still pretty great.
Sometimes we only have four, when a child is off at a friend’s house or my husband travels for work.  Even more rare, practically non-existent, is a mere two napkins for an in-house date night.  Conversely, sometimes we count out seven napkins and have to pull in an extra chair for grandparent company, which is only beat out by big family gathering when napkin need is grossly outnumbered by the amount of folding chairs that we own.
But still, I know I am truly fortunate when I count out five.  I never thought that something so simple, such a menial daily task could make such a difference in my life, but the older I get the more important I realize these things are.  Maybe it’s the fact that I do it so often, flipping through that stack and thumbing out one for each member of my family, that it has been so easily overlooked for so long.
As I sit back and watch my children get older, I realize that my days of setting five napkins are numbered.  The teen years send them spinning in a million directions, and soon enough they will trickle off to college or adulthood and I’ll watch my number of napkins drop.
From five to four.
From four to three.
From three to two.
And on those days when we gather and I am lucky enough to count out five napkins again, I will cherish every flip of my thumb and treat each one as the blessing that it truly is.  If the blessings continue, maybe someday I’ll have the pleasure of counting out eight or ten or twelve napkins.  I’d even make roast chicken and homemade mashed potatoes for that.