Attack of the angry appliances

- November 10, 2013
My appliances are trying to get me.  I think they’re angry because all summer long, when we’re all home all day every day, we use them a lot.   Also because I spend so much time cursing my dishwasher and my entire laundry room in general.
As a mom and CHO (chief household officer,) I spend a decent portion of my day playing a never-ending and not-so-fun game of catch up.  As soon as I finish the laundry, it’s piled up again.  Finish the dishes?  The sink is full.  Go grocery shopping?  The troops are hungry.  I often feel like a hamster on a torturous wheel where my children sit outside the plastic cage and laugh and giggle and change their clothes and ask for snacks because they absolutely delight in watching their mom go bonkers.
But now it seems that the house is trying to get me back for all the grumbling I do as I go about my day.
(The following stories are all 100% true.  I truly wish I could be making them up.)
The first bit of bad luck happened after an apparent allergic reaction to a popular brand of rubber shoes, which doesn’t really matter in the story except that after too many hours on the internet, I decided that the safest thing to do was to sterilize all of our rubber shoes in the dishwasher.
I will be the first to tell you I often complain when I wash the dishes.   It seems that no matter how many times I remind my family, they still think it’s necessary to take a separate glass with each sip thereby filling up the entire dishwasher before lunch.  But it has great accolades, too.  So when I went to disinfect our shoes, I carefully set them all in the top rack, turned it on, and walked away.
“I’m washing our shoes!” I yelled to my husband as I walked out the door.
“OK!” he yelled back and didn’t bother to tell me he hit the “high temperature scrub” button to make sure everything that shouldn’t be there wouldn’t be there.
And here’s where the dishwasher started the attack on me, or at least my shoes.  All of our shoes were just a little bit smaller when the cycle finished.  At least a size or two.
And I’m pretty sure it chuckled at me just a little when I handed over my favorite shoes to my daughter, and she handed hers to her younger sister.
Then, the next week, my dryer broke.  If you’ve ever experienced this horror, maybe you know how I felt.  Like a fish without a fin, like a hot dog without mustard, like a morning without a coffee.  Helpless.  There was underwear strung from every apparatus in the backyard on any given day until the dryer was apparently fixed by the repairman.
But yesterday was the grand winner of all chicken dinners.
The dryer broke again.  This time, it did more than just stop working.  It was more of an, “honey, I smell something funny, like someone threw wet socks on the fire” kind of a breakdown.
And that’s when the house completely started to attack because later that very same day, my son was told to take a pair of my socks  (which had dried outside on the back porch) up the stairs to my bedroom but instead decided to throw them up as far as he could and they landed in the chandelier.  Instead of my children dangling over the railing to their perilous doom, I told them I would get my socks later.
At some point, flipped on the light switch and the chandelier began to cook my socks, or more truthfully, melt them to the light bulb on which it rested.


And as I dangled from the railing myself, trying to pry my melted socks from the light bulb of the chandelier, I could only think that if my sandals wouldn’t have melted, I would have been sockless to begin with. 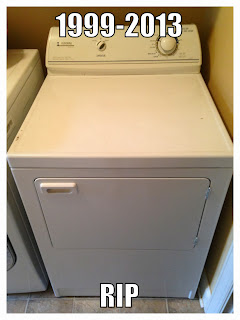