The unfolding of an RV trip


Apparently we took an RV trip when I was a young child, but my only recollection is running out of gas on the highway somewhere in Tennessee and standing on the side of the road, completely afraid for my life.
My next memory of a camper is the one parked in the driveway of my childhood friend, Liz’s, house.  I don’t even think it was theirs, but it was there and we would go in and play house and her mom served us roast beef deli meat sandwiches with A1 sauce on them, something I had never had before.  This luxurious adventure had definitely turned around my opinion of the house on wheels, not to mention opened up a whole new flavor profile for lunchmeat.
As an adult I admit the fascination has always continued, and so when my family decided on a summer vacation this year, we wanted to fulfill our dream of RVing out west.  The thought of only having to unpack suitcases once as we traveled between parks and cooking family favorite meals on a tiny stove next to a tiny refrigerator and tiny sink was far too enticing and we booked it.
If you are ever thinking of taking a family vacation in an RV, here is how the first few days might go:
Day one.  You pick up the beastly vehicle and upon opening the door, your children rush in and immediately start bouncing from chair to chair, laying on every bed, opening every cupboard, window, and nook and cranny.  They stake claim on their sleeping spots and within seconds somebody is begging to use the bathroom, because the thought of a bathroom on wheels is just about the most fascinating thing to a child.
Later that day, they realize that the availability of snacks is too much for their little self-control to handle, and by the end of the day, you realize there is a fifteen second gap of time between the time someone has to pee or wants something to eat.  It all feels very exhaustingly fun, but the saving grace is the bed that you can reach in a matter of milliseconds.
Day two.  By this time, the children have come out of ultra excitement mode and are settling in to life on the road.  Or the campground.  They have learned how to turn the table into a bed and vice versa and are pros at flushing the toilet.  You feel like you have become domestic master because there is nothing you can’t cook in that kitchen with three square inches of counterspace.  The husband struts proudly around because he has officially figured out the hoses and buttons that come with keeping this monster running smoothly.  Kids are playing cards and drawing pictures.  Everyone is considering selling the house and moving in to one of these babies permanently. 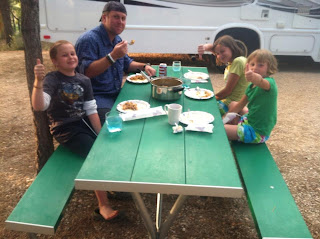 Day three.  The novelty is starting to wear off.  The general odors involved with five people in a small box start to become a permanent fixture and you think that maybe moving hiking boots to an outside storage compartment would be a pretty good idea.  Flatulence has been completely outlawed and even mimicking the sound earns you a stern look from a mother who cannot take it any longer.  Playing cards have been ripped.  The cupboard is full of half eaten bags of chips and you realize there is not a vegetable to be seen.  General fatigue has set in, but there’s that bed.  Right there.
Day four.  A new dawn is a new day.  Parents get strict and start barking orders to fold bedding and change underwear and brush teeth because moms know these things and before long, everything is clean and happy and we are ready to roll again.  First stop: grocery store for some roast beef and A1 sauce.