You'll chip your eye out


Quick note to subscribers and blog readers: I have been asked by my editor to post my columns one month past print date.  This should explain the big gap of time since my last post...how did you ever survive?  Keep in mind that these are all just a smidge out of date, so send yourself back four weeks while reading.  Thanks!

There are really specific moments in parenting that make it all worth the while.  Obviously I could name a few of the sentimental ones like when they first say “I love you,” or take their first steps or two-wheeled bike ride, or other such sappiness.  Instead I’m going to tell you the story of one such moment that keeps me giggling and wiping the tears away from my wounded eye each time I think of it.
We have three children, and the odds of them ever going to sleep soundly and early are truly not in our favor.  It seems that someone always needs something or simply can’t sleep, or by the time they all fall asleep the two of us are so exhausted that we collapse on the spot.  So it goes without saying that when the miraculous happens and we hear all three kids snoring away and we’re still awake, we do what we rarely get to do.
We sit on the couch and read books.
And we drink hot tea and beverages that stain carpet and burn skin when knocked over.  And we do not have to listen to the roar of children’s programming on television.  It is a real treat, to say the least.
It happened to be a dark winter night when we found ourselves just in this situation.  He sat himself on a chair with the soft glow of his e-reader lighting his night, and I on the couch snuggled under a blanket with an actual paper book that I had started about the time paper was invented and was finally getting a chance to finish.  A puppy curled up at my feet, we were basking in the peacefulness of the evening. 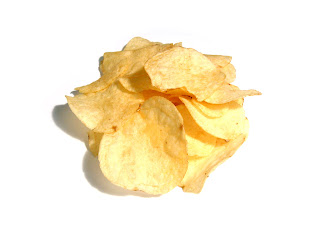 Engrossed in my book, I didn’t see him get up and head to the pantry for a bag of potato chips.  In our house, chips are coveted.  Knowing that a bag will be devoured in mere seconds by people who should not be eating a bag of potato chips, I rarely purchase them, so I knew just what he was doing.  He was having a snack knowing full well that the slumbering kids would not rip it from his hands and inhale every last crumb.  And although I didn’t see him, I heard him.  The telltale “crunch” of a good, solid kettle cooked bit of tasty wonder that made me start to salivate.  Instantly, I could think of nothing else and even though my waistline was saying “no!” my taste buds could take it no longer.
“Durnnit.  Now I need some chips,” I said and uncovered myself and stood up to reach for the bag.
Funny things happen when you’ve been married for a while.  You know each other’s wants and needs and it so happens that the instant I stood up to reach for a chip, he tossed nice, crisp, big one in my direction.  I imagine in slow motion it would have been quite epic because somehow, against all odds and laws of physics, that potato chip he tossed hit me square in the eye.  Not near the eye, not the eyebrow, not even between the eyes.  He literally chipped my eye out.
If you’ve ever been hit with a kettle chip in the ol’ peeper, you know the salty pain that follows.  You know the feeling of your poor eyeball being bruised by a snack high in fat and calories.
I’m guessing, however, that most people don’t.  Let me tell you, your eye begin to water, you clutch your face in pain, and you double over laughing so loud that waking up the kids would be OK because this is the funniest thing that’s happened to you in weeks.  Once you realize that you haven’t lost vision, you’re good to go.
For me, eventually the pain subsided and I settled back in with my book and my blanket and a tissue to wipe my weeping eye.  And, of course, the whole rest of the bag of chips.