Even in the aftermath of Halloween, when a few soggy decorations linger and pumpkins begin to rot, I can’t help but think about bats.  And thinking about bats takes me back in time to the most stressful interview of my life. At first I was not asked about myself at all.  I was asked about our flying mammalian friend.
There I was, a high school student still trying to learn to like the taste of coffee and trying not to look like a dork, and I sit down to my first interview for a college scholarship, and she asks me about bats.
Nothing specific, just something like, “tell me about bats.”
Truthfully, I don’t remember how I answered the question.  I was so nervous that probably all that came out were a bunch of “uh’s” and “um’s” and a trickle of drool down my quivering chin.  I think I spent a lot of time questioning in my head what she wanted to hear, if she wanted to hear about bats as they are in the movies, or bats as they are in real life.
I could have told her that bats are mean and vicious creatures.  They fly around on spooky nights and seek out their human prey.  I could have told her that they make nests in the hair of well-coiffed ladies and have a thousand little bat babies that will suck your blood to fuel their evil plans to overtake the mortal world.
I could have also told her that bats are blind, and that they all have rabies and are just waiting to infect every non-suspecting person and animal.  I could have told her they are dirty, nasty flying rodents when they’re not roosting in Transylvania or transforming into a caped villain.
But as I mentioned before, I pretty much just say “derf.” 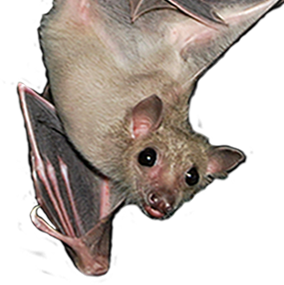 Now that I’m older and wiser and generally a lover of things falling into the nature category, I know exactly what I would have told that nice woman who scared the bat wing right out of me.
Bats are fantastic, amazing creatures.  They are not blind, and in fact all bats can see.  They just prefer echolocation, something that we’ll get back to later.  They do not in fact, suck the human blood of passersby, but instead most bats feed on insects.  The little brown bat (and that’s its real name, I promise) is a ferocious insect-eating machine and can eat thousands of them in one night!  I don’t know about anyone else, but I could do with a few thousand less mosquitos in the dead of summer.
These flying mammals are not rodents, but something of their very own special caliber.  Their wings are similar to our hands, and they even have something like a thumb, making me wish I could train one and name him The Fonz. Their cute little faces are not only cute, but they’re quite clean.  They groom themselves many times a day, which is something I wish my kids could manage.  And no matter how lovely your hair looks, a bat will not make a beeline for the curls on your head.  Bats roost in small cavities that provide protection, not even something super extra strength hair spray can provide.
But my favorite thing about bats is their sense of echolocation.  They send out signals and wait for the waves to bounce off their flying meals so they know where they are and can dive bomb them with more energy and speed than I’ve seen in decades.
And if I could do that interview again, I’d reschedule it at dusk when the bats just appear like little darting specks in the sky.  I would grab a handful of pebbles and say to that nice lady, “bats are great.  Check this out.”  Ad I’d toss a tiny pebble out in front of a bat and watch as it located and tried to catch it, swooping down with swiftness and grace, but never quite catching the stone.
I think I may have gotten a full ride.