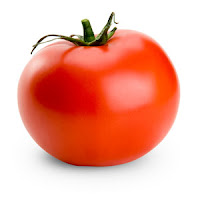 All hail the tomato.  It is the base of so much of our cuisine and stands firm in its acidic ability to thrive, multiply, and fill home gardens everywhere.  Often misunderstood and living its life as a conversation topic in the fruit or vegetable debate (we’ll get there later), the simple tomato deserves a little more respect than we give it.
First, a basic history of this odd plant whose leaves leave the distinctive tomato-y smell whenever you brush against them.  It is generally believed that the tomato that we know and love today originated somewhere in South America.  In the 1500’s, it traveled across the ocean blue and made a quite a splash; it’s nightshade relation to other poisonous plants typically turned people away.  The Italians, as I’ve read, were the ones who eventually fell in love with it.  I figure that they were faced with a giant bowl of un-sauced spaghetti when this thing showed up, so they gave it a whirl.  Personally, I’m glad they did.
It didn’t make its way into the United States until the 1700’s, at which point I’m pretty sure someone was standing next to a fire pit and said, “thy cheeseburger doth need something more than just thy lettuce and all beef patty.  Let us try this fruit/vegetable in slices.”  Welcome to America.
Fast forward to the 1800’s, and the lowly tomato began to raise quite a ruckus in the food science and taxation world.  Scientists had defined this reddish orb as a fruit.  By its very make up, it had all of the exact traits of a fruit.  It is the fleshy part of the plant, containing seeds and that can be eaten.  This was pretty basic science stuff, but when a tax was introduced on vegetables being imported into the United States, some guy who was bringing in tomatoes was forced to pay more.
You could imagine the banter.  “Fruit!”  “Vegetable!”  etc.  “I’ll see you in court!”
And that’s just what happened.  The infamous Nix vs. Hedden case in 1893 had the following outcome:  Though biologically the tomato is a fruit, according to the Supreme Court, it should be considered a vegetable because we don’t eat tomato ice cream.
Again, in 1981 this fruit vs. veggie quandary again arose, this time in the way of working “vegetables” into children’s lunches in the form of ketchup.  For what it’s worth, I don’t care much about the outcome of that whole issue because I have my own beef to pick with the tomato.
My problem with this ancient fruit/veggie is that it comes in too many forms and no matter what I call it, my children insist on opinionating over each and every one.
Consider the various ways that the average American child consumes tomatoes: pizza sauce, spaghetti sauce, salsa, ketchup, the occasional diced tomato in a casserole of some sort (my word, the audacity of you, mother!) and rarely just popping them raw into your mouth.
The same child that insists on applying ketchup only every piece of food that comes near their mouth refuses to eat salsa.  And the same kid that thinks pizza is so delicious because of that special red sauce they put on there would rather have a bowl of plain pasta than to taint it with a nice marinara.  And no matter what type of tomato-based product they eat or do not eat, chances are you are wearing a white shirt that will be stained before the night is over.
And as you’re standing there in your pajamas hunched over the sink scrubbing a once beautiful white shirt, your worries reach beyond the fruit and vegetable argument and daydream a nice Italian meal in a black shirt.

Note:  I am really late in posting this.  I promise we were in full swing tomato season when this ran in the newspaper.  Really.  I swear.
Columns