Showing posts from June, 2012
Show all

The Lament of Summer Break 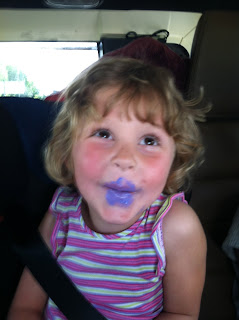 In all my years of parenting, Since those babes came out of my gut, I never have been so exhausted. Yes, summer is kicking my butt. From the day they stepped of the school bus, They instantly started to run. How can they go all day without rest? Summer is kicking my bum. I go outside and they follow me I come back in and they’re standing right here. The air conditioning bill is enormous, Summer is kicking my rear. It seems each day is so beautiful With blue skies and the sun so shiny, Surely we have to go out and play. Summer is kicking my hiney. Off to the library, the zoo and the park, “No, you can’t bring a friend!” Sure, I’ll set up the sprinkler. Summer is kicking my end. Sunscreen all day, passing out snacks The dirty dishes pile is uncanny. How do three kids go through forty-five cups? Summer is kicking my fanny. Bug spray at night while we run around, “You’ve got to let those fireflies loose!” How many jars of dead bugs have I dumped? Summer is kicking my caboose. But summer
Post a Comment
Read more

The wisdom of dads

- June 17, 2012
Dads and daughters are an interesting pair.  We daughters start off as “Daddy’s Little Girl” and steal their hearts, and before you know it we’re turning their hair gray.  In a blink of an eye, those dads are walking us down the aisle and giving us away, putting all of their trust in you that the lessons that they taught you will sustain you throughout life. My dad taught me many things.  He gave me my love for nature and music.  He taught me how to eat mushrooms and make a pot of soup the size of Texas.  He showed me how to drive a four-wheeler, be a dead eye with a shot gun, and how to use tools up and down the workbench.  For all of this, I am so grateful…and rather tough.  He gave me the confidence to do things I never thought I could do, and the desire to succeed at whatever I try.  (I think I inherited these things from him, which makes for very long games of Pinochle and Boggle.) But like most dads, he has gifted me a few token phrases that have carried me through my life
Post a Comment
Read more

Take me out to the ballgame 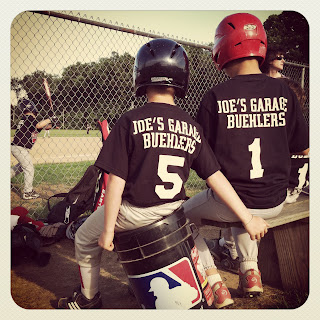 I didn’t grow up a sports person.  We never watched it on TV, went to any games, and while there were hundreds of baseball and kickball games played in the street, that was as far as I got.  The thought of a schedule and uniforms and all that jazz didn’t appeal to me.  My one-year stint at tee ball was productive in the literary sense, because while standing in the outfield, looking at the clouds, I wrote a poem. Ball?  What ball? My kids seemed to be traveling on the same path as I, turning down organized sports, not keen on practice and competition.  And I, who would rather not spend my time flattening my behind by sitting on a metal bleacher for twenty years, was OK with it.  The pressures, mental and physical, that small children endure during sports just weren’t something I believed in.   But then along came baseball.   More specifically, little league. This is not a game I ever really understood.  The games can potentially last forty zillion hours.  In the beginning o
Post a Comment
Read more
More posts