The gasses that we passes 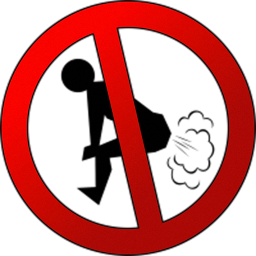 It’s time to get a little personal, and if you’re offended by the passing of gasses, I suggest you discontinue reading this column.  For in the next few hundred words, I’d like to express my maternal nose’s lament and explain why I have sudden outburst that I never thought were possible.  As a mother, you expect to yell things like, “clean your room!” or “finish your dinner!”  Maybe even a rhetorical question such as, “why doesn’t anyone ever listen to me?”  But it was a recent exclamation that got me thinking that no one really ever warned me about all this stinky stuff.
“I am so tired of smelling farts!” I yelled, in total honesty, on a chilly day when opening the windows wasn’t really an option.  Because when you’ve got three kids, a dog, a husband, and let’s keep it real here, yourself all processing food, there are bound to be releases.  I just don’t want them in such close proximity that not only does my nose burn, but my eyes also water.
“But farts are natural,” they argue.  “Better out than in, isn’t that what you taught us?” they quip, trying to turn my own logic against me as I bury my nose in the collar of my shirt as a makeshift gas mask.  And it’s true.  Apparently the average person produces 2 quarts of gas a day and passes it 14 to 20 times.  As food travels through our intestines, bacteria does its job aiding in digestion.  Their byproduct, however, is gas.  So if food is exceptionally slow or difficult to digest, the bacteria simply have more time to make more gas.  It’s not just beans or cabbage that can cause these “stink bombs” as they are sometimes referred to.  Everything from sugary drinks to bread to beef.  One of my best parenting tricks, though, is to serve a big bowl of broccoli and cauliflower and promise a farting contest after dinner.  Clean plates galore.
“But my farts don’t smell,” I often hear, which is a boldfaced lie if anyone ever heard it.  (Although, true story, I once walked into my mother’s room and said it smelled like fresh cut flowers and she about fell over laughing at my smell description of her flatulence.)  Mostly, children create gases potent enough to clear a room or in some cases, require me to roll down the car windows even if it’s negative thirteen degrees because my inner nose would rather freeze than register the scent of rotten eggs.   One study that I read revealed that males have a higher odor quotient when it comes to farts—they scored a whopping 0.86 compared to a female’s 0.54.  I have a sneaking suspicion that if they included dogs in this study, their stinkometer scale would have just shattered.
“But farts are funny,” they say, and for that I have to agree.  Historically speaking, farts have added humor to just about every culture since before the dawn of whoopee cushion, which really only added to the snickers and giggles.  If you find yourself in a quiet room of people and the only sound you hear is someone doing the one cheek sneak, if you’re not laughing out loud, chances are you’re working hard to hold it in.
In reality, farts hold a special place in my heart, because like many kids I was never allowed to say the “f-a-r-t” word.  I was required to call them stinkers or tooters, and being so very desperate to verbalize this funny and forbidden word, I would go into by bedroom, shut the door and bury my head in my pillows.  Only there, when I was sure my soundwaves would be safe from adult ears would I chant, “fart fart fart fart fart.”  It wasn’t until my parents deemed me mature enough that I was able to use the actual word in public.  Are my children allowed to say it?  Yes.  Better out than in, as I always say, but too much of a good thing isn’t always the best.  So they must learn to use moderation when it comes to the sacred word, just as they must also learn to hold them in until they’re out of earshot and farther than the range of my sniffer.

Lynn said…
Hey! I've been following your blog for awhile, but haven't commented. Here or ANYWHERE in awhile! Got too busy to spend so much time at blogs. Sigh. Anyway, there's a Kreativ Blogger award awaiting you at my place. Just cut and paste if you're interested in playing. www.allegriaimagesbylynn.blogspot.com :)
May 16, 2012 at 12:21 AM