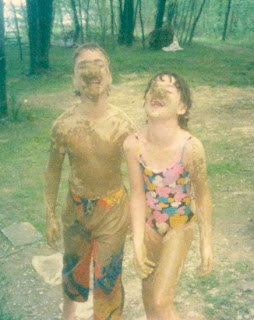 God made dirt, and dirt don’t hurt.
I can’t take credit for this phrase that I use so often.  I first heard it somewhere lost in the wilderness of New Mexico from a friend on a backpacking trip while discussing living in our own filth for the past five days.
“God made dirt, and dirt don’t hurt,” she said, and then we scooped up a handful and wrote empowering words all over our selves with the dark brown mud from the forest floor and went on our way.  Filthy, stinky, and quite happy.
As it turns out, we were really doing ourselves some serious good by using the natural body paint, and even more, my friend’s phrase seems to be truer than we accepted.
Researchers from Oregon State University have concluded that dirt does more than just not hurt.  It may actually be healthy for you!  (Feel free to go outside, dig up a good mushy bit, and slather in all over your face right now.  I don’t, however, suggest eating it.)
The basis of the article is nothing new, that playing in dirt when you’re a kid introduces your body to all kinds of lovely bacteria and germs so that you can build up your system to fight off other things as you grow older.  Allergies, immune deficiencies, etc.  Instead of getting vaccinated at the doctor’s office, you essentially get vaccinated in the mud, and having held down my children while getting shots, I can personally attest that playing in the dirt would be a lot less stressful.
The main point of the article, though, is not necessarily about the mud, but who plays in it.  Girls just aren’t getting enough dirt.  Whether its because parents like to dress their daughters in frilly white clothes or whether society has pre-programmed girls to think playing in outdoor conditions is just “icky,” there’s a definite shortage of muddy misses who aren’t getting their recommended daily allowance of bacteria and germs.  The scientists in the study think this lack of exposure to yucky stuff has had serious effects on females as they age, stating that women statistically have higher rates of asthma, allergies, and a 3:1 ratio compared to boys when it comes to autoimmune disorders.
And apparently all we have to do to protect our children is to open the back door and kick them outside.
It’s more than just mud vaccination, though.  Countless studies have been done about the whole life benefits of playing in nature.  The American Academy of Pediatrics suggests that children play outside for 60 minutes each day.  Physical fitness is well accomplished by playing tag and other such games, and being outside helps improve vision, vitamin D levels, and motor development.  Sadly, a recent study by some other long-named pediatric group concluded that nearly half of all children between the ages of 3-5 are not taken outdoors every day.  And while I understand that climate and weather can skew some studies, but this is just plain depressing.
If you forget about the girls vs. boys issue, the autoimmune disorders, the epidemic of childhood obesity, and every other scientific study out there, a few simple things remain.
Playing outside is fun.  Dirt is good for the soul.  Sunshine makes you smile.  Rain inspires dance.  Stars can’t help but make you dream.
Just yesterday I found myself in a situation outside with my children where there was nothing around except a large grass-covered man-made hill used for sledding in the winter.  While I sat there, I couldn’t help but watch and admire as they truly played on this hill, rolling down, running down, making dandelion chains and more.  When they came back to me covered in mud, grass stains, and dandelion stained faces, I heard, “sorry I got so dirty, mom.”
“No worries.  God made dirt, and dirt don’t hurt.”
Thankfully, someone else somewhere made stain remover and high-powered laundry soap for some of the healthiest kids I know.

ps.  Yep, that's me on the left, after my friend and I got into a bank of good, Ohio clay.