The happiest place on earth, if you can get there


Years ago when our first daughter started in her princess phase, I put my glass-slippered foot down, right then and there.  I told my husband and anyone else who would listen, “I refuse to take our children to Disneyworld until they can walk the whole park because strollers irritate me up to here and I’m not parking it out in the middle of nowhere when we all have to go to the bathroom at the same time.”
And pretty much I started training them all since day one, forcing them to take long walks through the woods or around the block.  It wasn’t so much because I was yearning to take them to Disneyworld, but more because I knew that there would at some point be a window of magic and fantasy for all of them at the same time.  Before the oldest got too old, and when the youngest was not too young, we had to be ready and raring to go.
Not only that, but having talked to friends, I was just downright scared to try to book a Disney vacation.  “People write entire books on this stuff,” I said to my husband, who had ordered a set of DVD’s that would take longer to watch than actually going on vacation.  There are packages and plans and about a thousand different choices in every category, and, silly me, all I wanted to do was to fly to Florida, buy a ticket and get our picture taken with Mickey in front of Cinderella’s castle.
Anymore, that’s too much to ask for, I guess, and in frustration I threw up my hands and gave my husband the luxurious job of planning the trip.  For one, he’s a thousand times more organized than I am, and secondly there would be a good chance I’d slug Mickey when I saw him if I had to do the legwork.
Before I knew it, we had plane tickets and hotel reservations at “the most complicated place on earth” and began our at home preparations of packing and dreaming of sunshine and blue skies. 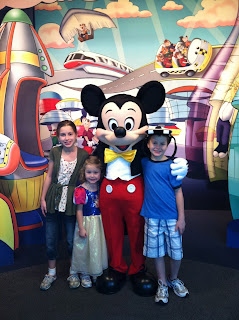 That first daughter who has been deprived of Space Mountain and Fantasyland for so many years made numerous lists for us, all of the items practical and thoughtful.  “We need good walking shoes,” she said, well-trained child that she is.  She has an autograph book and pen ready and waiting and overall she’s way more prepared than I could ever be.
My son was concerned about one thing—his carry-on bag and how many things he could take on the airplane.  A Cub Scout and an outdoorsman in the making, we had to search all of his bags for the predictable pocketknife that he has stashed for preparedness in every pocket.  (I was not, however, surprised when at the airport he pulled out two plastic tanks to play with on the airplane.  Because everyone needs some tanks on the airplane, right?)
The youngest princess has not slept well in days and has asked us 47,839 times how many more sleeps until we get to Disneyworld.  She has had her princess dresses laid out and will tell anyone and everyone of our upcoming destination, no matter what they ask.  I have the slightest feeling that when she actually sees a real live princess she might very well faint.  Perhaps I should have packed smelling salts.
And so, not-well rested from late-night packing and throwing ourselves into this adventure full bore, we venture on our first family vacation to the happiest place on earth.  If we could survive the planning, surely we can survive the few days of wonderment that we’ve been training for all these years.  And I have a sneaking suspicion that even if I did do the arrangements myself, I would still give Mickey Mouse a hug rather than an uppercut.
And take a picture.