- January 03, 2012
It is said that there is power in numbers, but nothing can compare to the numbers of the massive swarms of birds that swirl around us when the weather starts to turn colder.

If you’ve seen them, you’ve stopped and stared.  Chances are you may have even counted one-Mississippi, two-Mississippi, etc to see how long the train of blackbirds lasted, and most definitely you’ve marveled at how fluid and graceful such a group could be.  (Until they land in your yard, that is.)


Such an impressive act of nature deserves a moment of your time, I think, and what makes it even better is to know a little bit about what you’re looking at. 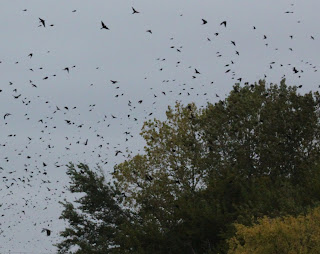 As it turns out, they aren’t all blackbirds.  Well, they’re all black birds, but in fact a few species are usually involved in the dark streaks of night moving through the early winter sky.  Brown-headed cowbirds, common grackles, European starlings, and even red-winged blackbirds all join together while making their migratory journey towards warmer weather, exactly what we humans wish we were doing while we stand bundled up and watch them swim above us.
It is pretty easy to figure out why these birds all fly south for the winter.  The bugs die when it gets cold, and without a decent food source and no invitations to holiday parties, the birds throw their wings up in the air, look at each other, and decide to get out of here.  I don’t know that I could blame them.
What is most interesting about these giant flocks of birds are the birds that make them up.  Brown-headed cowbirds are generally not very nice birds and lay their eggs in other birds’ nests. Red-winged blackbirds are so territorial that I have watched them dive-bomb each other among the marshes near my home.  Starlings are known to be aggressive and if you’ve got a bird feeder in your yard, you’ve probably seen the common grackle claim his role as the hog of the seed, scaring other birds away and generally being a pig.
But then, when the food supply is suddenly low, they all become buddies and head south to the beautiful marshes.  It’s a bit of a mystery.
Some say that they realize that there is indeed safety in numbers, that when you’re hanging out with hundreds of thousands of other birds, there’s a decent chance that if something’s coming to eat you, you can happily dodge it and leave the fate to another bird.  Others say that it has something to do with the history and the arrival of agriculture in North America.  Others chalk it up to a pattern of nature, that birds that share speeds and habits and that birds of a feather just happen to flock together.
No matter the reason, during this season of holiday and togetherness, there are a few lessons to be learned from these awesome assemblies of aviators.
When the going gets tough, the tough fly south.   (Although we northerners insist that the tough stay here and brave the winter months, the road salt, the ice patches, and the constant shivering while we poke fun at everyone who migrates while secretly being jealous.)
Keep your friends close, your enemies closer --just in case someone wants to eat you, or because that enemy might know where the good grub is.  (This also applies to holiday parties.)  And yet, enjoying the company of others isn’t all bad, and when the weather gets chilly, time might be best spent with a few thousand acquaintances.
But mostly, when the world gives you a show as amazing as hundreds of thousands of blackbirds soaring and swooping in a waterfall across the sky, maybe it’s best to stop for a second or two, and just stare in wonderment.  Maybe the birds would get just as excited to see a swarm of humans of all types, standing still for a moment.