Pay no attention to the man with the long, white, beard. He doesn't belong to us.

- December 12, 2011
And there we stood, all five of us, in line for our photo with Santa.  My dear husband who is not privy to the ins and outs of ordering Santa pictures, went ahead and ordered two without my knowing.  According to the way our Santa’s photo shoots work, we had paid for two pictures each of two different shots.
Which is two more than we really needed.
But still, when life presents you with an opportunity, you take it, and for us that meant piling in around dear old St. Nick and posing for a family photo.
It was practically a Christmas miracle in and of itself.
“Hurry up and tell him what you want,” I told the kids.  “We’ve got an important picture to take here.”
And as we stood there, cheesing it up while my kids sat semi-petrified of the man in red, my first thought was one of complete practicality and selfishness.  “Finally,” I said to myself, “a full family photo.  Now I won’t have to feel like such a bad parent at preschool anymore.”
This excitement comes off of the heels of an embarrassing mom-moment when my daughter was asked to bring a family picture into her preschool class.  Apparently they were going to count family members or do something super cute like that, which was kept secret.  All I knew was that I needed to send one in.  It didn’t help that I remembered very last minute, but as I scurried around I sadly realized that we have not one single family picture with our entire family in it taken in recent times.  Not even hanging on the wall in a frame.  We have plenty of pictures of my husband and the children (taken by myself) and plenty of pictures of the kids and I (taken by my husband,) but none of us all together. It seems that life just hasn’t allowed us the courtesy to pose for one, mostly because there’s no self-timer on our cell phones which is the way we now take 99% of all photographs.
Besides the hardware issues, there’s also the fact that with five people in a family, there are substantial odds against everyone looking decent at any one given millisecond of an open shutter.  Chances are someone never brushed their hair or someone else dressed themselves without mom’s approval.  (Captain Camouflage Never Looks Dirty But Really Is and Princess It’s Backwards Day, I’m talking to you.)  And then there’s always the way that I end up turning my head to yell at someone to not stick out his tongue and the print reveals me and my bad hair with eyes closed, mouth open, and a wrinkled forehead aiming at one of the smallish people in our family.
But the lady behind the camera said it was a good enough shot and moved us right along while dozens of children waited to tell Santa what they want for Christmas and to get their own treasured keepsake.  Not only that, but they also stood there with their parents, a group largely composed of our peers and neighbors, who all saw us amble up and position ourselves poetically in front of the fireplace background with our surprisingly color coordinated outfits, as if we planned it.
But we didn’t plan it.  Instead I’m just chalking it up to being one of the little bits of magic of the Christmas season that reminds you that something in the air is just a tad different and a tad more joyfully mysterious.  We certainly felt the joy, holding our smiles and waiting until the man in red himself passed out fun-sized candy treats.
Believers?  Yes.  And anyone who isn’t will see photo proof on our Christmas cards, in my daughter’s preschool, and potentially even framed and hanging on the wall. 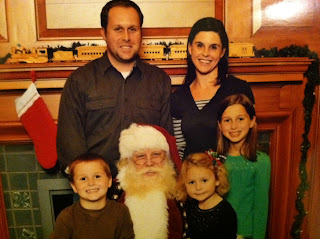