- November 10, 2011
(Because of space issues, this column didn't appear in its entirety in the newspaper.  If you were looking for a missing ending, find it below...)

They say everything’s bigger in Texas, but I think everything is bigger in Parenthood.  I came to this realization when I recently downsized the girth of my vehicle.  I did this purely out of selfishness, because I really got tired of my kids calling it a “spaceship” and having to park in Timbuktu so that no one would smash into my doors.
Bigger cars are convenient for children.  You need seats to put them in, cargo room to haul their things around, and compartments galore to hold emergency snacks, books, deodorant, homework pencils, etc.  If I had a semi-trailer, I could certainly fill it with the things we tend to need while on the road running from this to that.  In fact, I would be lying if I said I never dreamed of just buying an RV so I could take an honest nap during piano lessons.
But with my new smaller vehicle, I’ve been awakened to an entirely new philosophy of motherhood.  Everything gets bigger.  (Except patience and free time, but that’s another story.) 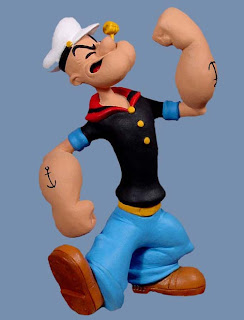 And so, an annotated sampling of a few things of mine that have gotten bigger since I upgraded from Wife to Mother:
My Purse.  I used to not even carry a purse, it was merely a wallet with an extra storage pocket.  Now when I toss the tote bag of necessities into the front passenger seat, I swear the air bag turns on.
Shopping Carts.  It’s a good thing I have experience driving a large car because if you’ve never had the pleasure of maneuvering one of those giant beasts through the aisles, it’s almost as hard as signing the credit card slip when you see how much money you spent to fuel your growing children.
Arm Muscles.  I personally got into the habit of holding my children while going about my entire day.  With each pound they gained, my arms began to look a little less like Olive Oyl and a little more like Popeye.
Medicine Cabinet.  Cough?  Cold?  Allergy?  Fever? Belly ache?  Somehow we find it necessary to have symptom suppressants for every ailment, for every age level, not to mention 3,000 of those little plastic measuring cups accumulating in our kitchen drawers.  This, of course, does not include the plastic cups and medicines that have made their home in my ever-prepared giant purse.
Medical Bills.  Because sometimes you want your kids to be healthy, happy, have straight and clean teeth, and live long enough so that they can endure the same explosive sizes that you are.
Bags Under My Eyes.  Naturally your kid decided to get sick in the middle of the night and you have to hold them and love them until the doctor’s office opens.  (See above.)  Under eye bags are also caused by having to stay up all night to sift through the gobs of paperwork your children throw at you, and you sort through them and really wish you could carry around a personal assistant in those bags.
Bookshelves.  Fellow book people will understand this without an explanation.  I’m pretty sure my house has sunk two inches under the extra weight of picture books.
Miscellaneous Body Parts.  Forget the arm muscles and eye bags, there are plenty of other body parts that lose all concept of proportionality after you become a mother.  Weight seems to distribute itself in a way that your body is afraid that you’ve got balance problems and consequently adds bulk to your feet and every other place that you really don’t want it to go.  I’ll just say that my center of gravity is sufficiently substantial.
Bed.  At the end of the day when you’re exhausted from driving your big car and hauling your big purse to the doctor’s office while filling out sport release forms in the waiting room, nothing beats a giant bed for flopping down.  You relish the space because no matter how big it is, sometime during the night there may be the pitter patter of little feet down the hall and what space you had will be taken up by the warmest, softest, often smelliest, ball of the biggest love you’ll ever know.