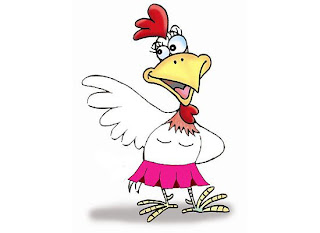 Once upon a time there was a little red mom who lived in a house. She had three children who often resembled a lazy brown dog, a sleepy red cat, and a noisy yellow duck.

(There was also a little red dad who seemed to be off at his job when all the fun stuff happened, which the little red hen often wondered if he did on purpose so that he wouldn’t want to pull his little red hair out.)

One day the little red mom found some dirty socks on the floor, crumbled up and so filthy that they were completely stiff and were omitting a fierce odor. The socks were nowhere near where they belonged, which would be in the hamper so the good laundry fairy could whisk them away.

“Who will help me wash these socks?” asked the little red mom.

“Not I,” quacked the noisy duck as she went off singing some song about being a Musketeer.

“Then I shall wash them myself,” said the little red mom, along with some other grumbled words under her breath. Off she went to the laundry room where she had secretly stashed some gummy bears because she knew that no one would find them in there.

When the socks were clean and the dryer buzzer sang that ominous tune of impending folding doom, the little red mom asked, “who will help me match the socks?” (The little red mom loathed matching socks more than planting seeds, growing wheat, grinding grain, and baking bread. Combined.)

“Not I,” quacked the noisy duck who appeared to be wearing a formal dress for no good reason.

“Ah, then I will do it myself,” said the little red mom with a mouth full of gummy bears.

When the socks were matched and the laundry folded and organized into individual baskets for the entire heap of slothful animals, the little red mom had yet another question.

“Who will help me carry these laundry baskets up to your rooms?” asked the little red mom.

“Too heavy,” said the lazy dog.

“Dora’s on!” quacked the noisy duck who had decided it was a good idea to get herself a bag of potato chips for a snack while the little red mom was folding laundry.

“Ooh, aren’t I the lucky one,” said the little red mom, huffing and puffing and hauling all five baskets up the stairs in one shot out of sheer rage and disgust, most likely pulling some deeply placed muscle in her back that would require weeks of massage therapy to get resolved.

But then when all the baskets were placed in everyone’s rooms, wearily she asked one final question.

“Who will put away their clothes?” asked the little red mom.

“Not I,” said the lazy dog who was nose deep in a book.

“Not I,” said the sleepy cat who was constructing a fort from every known blanket in the house.

“Seriously, I would just shove the whole basket under my bed with the dozens of naked Barbie dolls and the library books you thought you lost,” the noisy duck would have said if she could articulate what was going on in her head instead of torturing the dog with love.

“Surprise, surprise,” said the little red mom, who was getting redder by the minute. “I suppose I’ll do it myself. Later.”

The next morning when the dog, the cat, and the duck were getting ready for school, they all tracked down the little red mom.

“Have you seen my jeans?” asked the lazy dog.

“Is this dress too dirty?” asked the noisy duck who had managed to turn her skirt the color of barbecue potato chips.