Butterflies, not rain, on my big day 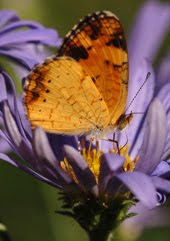 I’m always telling children to protect nature. They always look at me with the same puzzled look, because they don’t quite grasp the concept of conservation.

They do, however, get the point when I say, “don’t hurt Mother Nature, or else it’ll rain on your birthday.”

This is of course something I concocted. It’s not scientifically true, and it’s not even an old wives tale. Instead it’s just me, trying to scare kids into packing out litter and not karate chopping trees or throwing rocks at bunnies. And though it’s not technically confirmed, I will say that this year it more than proved itself for me.

I spent my birthday, where I miraculously again turned twenty-nine, in a touch of wilderness. Mostly surrounded by friends and family, we ate a heavy breakfast and opened a few gifts before the afternoon sunshine was too much to handle. My dear husband sent me out the door with my book and a bottle of lemonade and told me to head to the raft on the pond.

And by pond, I mean a man-made smallish lake where we have seen actual leeches attach to actual legs. There are frogs and fish and turtles and snakes and that’s just the start of it. But there’s also a big raft that puts you right in the middle of all of that wild water so that no one really wants to swim out and bother you.

To a mom who would cut off her ears for a few moments of peace without someone poking someone or asking for a drink, the peaceful isolation of the pond was just what the birthday girl needed.

A large raft, our family has spent many an hour floating through the water and my husband and I spent 99.9% of that time watching children jump off and climb in, struggle with life jackets, splash us with water, sing made up songs about flatulence, and generally be 100% unpeaceful. But for my birthday, I was on the raft alone.

The peacefulness must have been attractive because I was joined by none other than a petite butterfly, some sort of fritillary, if I was guessing.

It first landed on my bright bathing suit and slowly I coaxed it onto my hand which I knew would be a bit tastier than nylon or spandex or whatever the suit is made out of. And there it sat, dining on my afternoon sweat. (I realize this sounds disgusting, but it was the most beautiful thing I could ever imagine.)

Butterflies, if you’re not aware, have this long straw-like mouth part called a proboscis. When fluttering by, it just rests all curled up and tucked away, but apparently when landing on my hand it unfurls this big straw and ever so gently has a mid-afternoon snack.

This must have been a hungry little butterfly, because it crawled around my hand, barely tickling my wrist until I carefully moved it to my leg because at this point, I had spent minutes holding my hand perfectly still right in front of my face and it was staring to go numb.

And so it went, moving from hand to leg to shoulder and so forth for well over fifteen minutes, which is the longest I personally have sat still in years, until eventually I noticed that a spider was spinning a small web on my leg that was being so very still thanks to my butterfly friend. A quick jerk and a flick of an innocent spider elsewhere, and my fluttering pal had moved on, a well-fed companion on my special day.

If there’s one thing I learned from the whole episode, it’s to make time to actually stop, look around, and notice the little things so that they might get the chance to notice you back.

And of course to protect nature. Butterflies don’t fly in the rain.