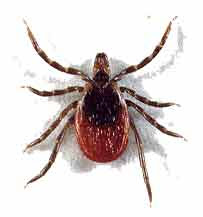 As a mother, there are certain words that you’d rather not here. In the summer, some of my least favorite words are, “Mom? What’s this bump on my head?” because I have been around enough to know that if you spend time romping through the woods, that little lump is going to have eight legs and a thirst for blood.

I’m no stranger to the little insect, and have been on both sides of the tick experience more times that I can count. For every tick I pulled off myself or a dog, my poor mother pulled at least that many off of me as a child. I have vivid memories of sitting on a picnic table while my parents yelled at me to “hold still!” and “stop moving!” and before returning to their game of horseshoes would ask me, “what do you do, roll around in the woods?”

And actually, I kind of did. The woods were my personal playground when I was little, and now my own kids spend a lot of their summer season in the same type of places, running and playing, and generally being kids.

But I fear there are a few less kids playing somewhere in Northeast Ohio.
I recently came across a news article explaining why a certain playground had been closed. Someone recognized some ticks on the slide, and authorities decided that the best thing to do would be to close down the playground area and spray heavy pesticides all over the place.

At of my knowledge, the playground remains closed until further notice.

Whether or not you’re on the side of the officials or the side of the ticks, one fact remains: no matter where we are, we’re still at the mercy of our natural surroundings. Even little blood-sucking insects like ticks kind of have a right to hang out in neatly mulched, plastic constructed playgrounds.

As a parent, I admit that I’m not super fond of ticks. This year already I’ve removed four from my dogs and one from a very creeped-out kid. That may have not been a drop in the hat to my parents, leaning over my head with tweezers and a flashlight, but it seems that times have changed. Back in the good ol’ days, tick-born diseases were either non-existent, non-reported, or just weren’t splashed all over the media, scaring us into our houses and dousing ourselves with DEET.

Today, we’re made very aware of the dangers, and if we listen closely and try not to panic, we are also informed the best way to remove ticks. According to the CDC, you should take fine-tipped tweezers and grab as close to the head as possible. Slowly and steadily, without jerking, pull the tick out and then clean the area topically.

It’s pretty much just that simple, and for generations, we’ve been doing that exact same procedure on our pets and children. It’s an unfortunate part of being outside, but in my opinion, it’s even more unfortunate that a single tick or two would close down a playground and kill likely hundreds of thousands of insects.
To the children, please don’t hate bugs. Remember that your playground was also their home. Be respectful of your surroundings, inside and out, and don’t be afraid to hit that slide again as soon as the park reopens.

To the insects who may have fallen before your time, rest in peace. And to you, the ticks, I’m sorry you had to go this way. If it were me, I would have waited until I found you in my hair, plucked you out and flushed you down the toilet like in the good old days.