By definition, a warrior 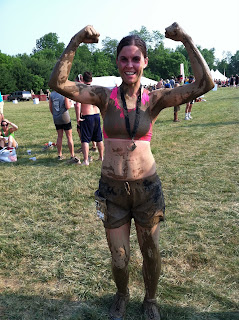 “I’m going to wear all black. It only seems fitting.”

These were my words to a friend while discussing what one wears to such an event. “Not only is it the color of misery, but I’m guessing the mud won’t stain, and neither will my sweat and blood.” I was feeling pretty proud of my forward thinking.

The event, which my husband signed me up for months ago against

my better judgment, is a new craze in the running world. Not at all for charity, this race actually costs you hard eared money, leaving you thinking somewhere in the second mile why you would pay someone to beat yourself up so very much.

The race is called the Warrior Dash, and is catching on like the fire that you eventually jump over. (Yes, this is true. Read on.)

A three-mile course spotted with numerous obstacles, thousands of people line up to test their warrior skills and see if they can prove that they truly deserve the fuzzy Viking helmet you are given when you register for the race.

(At this point you’ve probably just re-read the last sentence. A fuzzy Viking helmet? Absolutlely. And it’s the least crazy thing you’ll see the entire day of the race.)

Lined up by the hundreds at the start line, fire blazes up into the sky to release us all on our warrior journey. Next to us in line is a group of people dressed as the Teenage Mutant Ninja Turtles and someone near the front of the group is wearing only Captain America underwear. Earlier in the day, a full grown banana walked by which was applauded because costu

mes are welcome. I personally opted for regular running clothes as they were practically a costume to me. Generally speaking, I am not a runner. And while standing there waiting for the flames, I did my most training, running my mouth at my husband who signed me up for this ridiculous race.

Being a busy mom who spends a large portion of her day driving kids to and from events and yelling at them to hurry up or standing next to a stove making dinner, I didn’t have a heap of time for preparing for this thing. “I’ll start running next week,” I kept telling myself. And then, suddenly, it was the day of the race. Oops.

But then the flames went off and adrenaline started pumping and I went on to have more fun packed into three miles than I have ever have before.

Among the course were a series of obstacles to conquer. Too numerous to list, I’ll enlighten you with a few that have scarred my memory:

The pond swim, through murky water and over strategically placed logs.

The junk cars, to climb over and through open doors.

The 20-foot high cargo net to climb over and down, which thankfully I didn’t have time to think about because my body had already gone into autopilot. I think if I had taken even a split second to look down, I might still be up there, gripping on for dear life and listening to people calmly try to help me to the ground.

The tunnel of terror, a very low tunnel that you have to crawl through on your hands and knees, over dirt and rocks and strategically placed roots. I think it was at least four miles long (in a three mile race) because it was the worst part of the whole event. And I had the bloody knees to prove it.

There was the rappelling wall, the creek run, the planks to walk across, and more. All mere child’s play compared the grand finale, which was – and I’m not making this up – jumping over fire and crawling through mud under barbed wire.

Covered head to toe in Ohio’s finest clay-rich mud, my white teeth blazed like beacon in the night as I spent the next good hour smiling and enjoying my new rank as a bruised and battered warrior.

My fuzzy helmet has since gone to the dress-up bin in our basement. I decided to not keep it as a trophy, mostly because I’ve already signed up for the next race.