To each his own: beer and Earth Day 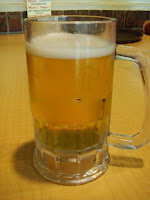 My grandparents used to have a novelty sign that hung in their basement. “A man’s got to believe in something. I believe I’ll have another beer.” I spent most of my childhood not quite understanding it (not that I was supposed to) and most of my young adult life ignoring it.

As it turned out

, as a young adult I ignored most things, including my parents, some of my teachers, many of my peers, and most certainly the people who truly believed in something and wanted to tell me about it. Most specifically I can recall sitting in debate class, assigned to argue about cryogenics and really not caring one way or the other, and I couldn’t imagine how anyone could think frozen people was something to make a big deal over.

In college there were plenty of people who believed in something and gobs and gobs of them trying to convince me at every turn. Sign this petition, march in this parade, hold these signs. I don’t remember anyone burning their bras per se, but if someone would have I probably just would have walked around the flaming undergarment.

The news is chock full of people around the world believing in something so strongly that they would lose sleep, jeopardize their families, and risk their own life for it. And all the while I’m trying to figure out why it’s such a big whopping de

On a smaller scale, there are the parents who volunteer countless hours at their child’s schools on their own will and others who give hour upon hour of time to their local government or church. Some fundraise for charity campaigns and some protest society’s methods. Some throw paint on fur coats and others tie themselves to old buildings.

And I don’t understand any of it.

What I have come to learn after so many years of pondering that sign in my grandfather’s basement is that the sign is absolutely correct – at least the first part of it. Every man – or woman—has to believe in something. And the great thing about living in the USA is that we have a right to believe in whatever we want and even are allowed to tell people about it. So while I don’t quite understand what these people are doing, I understand why they are doing it: passion.

They have their own particular cause, and it’s because not everyone shares the same cause that keeps this world just a-spinnin’.

I mention all of this because we are at an important time in the year for what I have determined to be my own cause, a cause that has been hiding in my heart for so many years until finally it reached my brain and I realized, wow, I really do care about this.

Earth Day, Arbor Day and a change to warm weather fall very close to each other, whirling my life into a burst of appreciation for the cause that means the most to me: the out-of-doors and the natural world. I love it all. I love wildlife and trees and plants and creeks and rocks. I do not like clear-cutting and trash thrown in every directions. People tossing cigarette butts out their car windows makes me batty, and strangely enough, I love bats. I love the feeling of warm dirt and seeing a sapling make it through the winter. I love watching the wonder in a child’s eye when she finds a crayfish under a smooth rock, standing ankle deep in chilly creek water or catches a glimpse of the woods when the trillium are in full bloom.

And in my mind, there’s just not enough of this good stuff going on, and so it is my own personal cause.

You may not find me ever marching down the street with a banner or campaigning for a politician, but there’s a good chance I might try to convince you to plant a sunflower or take a hike. I’ll probably be in the woods with my own family, all except my grandfather. According to the sign, he’ll be somewhere near the fridge.

valerie said…
Karrie, I loved this! Straightforward, well- said and impassioned without preachiness. The trees in my backyard teach me so much about life just looking at them each day.
April 21, 2011 at 8:54 PM