The allure of puppy breath 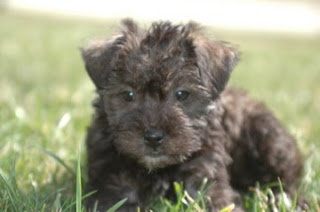 What has four legs, a lot of fuzz, and the power to melt your heart in a matter of seconds? I’ll give you a clue. It’s also the same thing that has a wet nose and the ability to say “take me home I promise to love you and will try not to hardly ever pee on your carpet” without even being able to speak anything besides a high-pitched “arf.”

Man’s best friend is a curious creature, and as much as I will deny it, my whole body turned to lovey dovey goo when we walked in to the pet store and she and I locked our dark brown eyes.

I tried to look away, and in fact I did. I walked around and looked at the other dogs and I laughed at the bitty puppy treats that looked fancier than anything I would serve myself and the jeweled collars and gold studded doggie attire. As a person used to large outside dogs, a little fluffy foo-foo pup was uncharted territory. So it was rather odd that I found myself pining for that little puff of a mutt who must have hypnotized me with her puppy stare.

Like most people, we were not intending on buying a dog that day. In the future, yes. Near future, even, once the weather warmed a bit and we were past the chores of spring. We knew it was time for us to get a second dog for many reasons. For one, our other girl tends to act her elderly age, the most “running” and “playing” she does is wag her tail while getting up to mosey to her food dish. But mostly we thought our kids are just about the right age for a puppy, being capable of letting it out and keeping its dish full. In exchange for their hard work, they’d get the pleasure of teeth sinking into their hands and the smell of puppy breath up against their noses while the softest fur in the world rubbed against their cheeks.

But I’m not that naïve to think that my children will be the sole caretakers of this new puppy who has entered our lives. I know full well that this mama has taken on the raising of yet another child, all three or so pounds of her little Lucy Brown self. (My kids love with the song “Mack the Knife” and while they don’t really understand the gruesome lyrics, they love to sing “…and old Luuuucy Brown…” at top decibels.)

And even though she weighs barely anything and is so small you’re libel to step on her or mistake her for a lone slipper, Lucy has been using her power to take over my life as if she were a real baby instead of just a puppy.

My husband takes the late night potty break, and I take the early morning shift. I carefully measure and mix her tiny puppy food and keep all of her toys lined up and ready for our playtime. I even went as far as to buy her a teeny sweater because, as I defended to my husband, “there’s still just a bit of chill in the air.” His reply was the largest eye roll known to mankind. And probably dogkind, too.

This mini furball has naptime, bedtime, and has gotten more potty training attention than my own human children ever did, although my kids never had the nerve to squat in the middle of the carpet while looking directly at me as if to say “you took me home and I love you but I’m so cute you won’t hate me for stinking up your family room.”

Because really, she is that cute. And if I can potty train three humans, surely I can handle a little puff of fluff and have a stern hand even if my heart is just a melty pile of goo.