- December 02, 2010
Any major retailer will tell you that the Christmas season starts in September, when they start taking down the racks of seeds and put up the giant inflatable Santas on top of every aisle. The radio stations will tell you that the holiday season is upon us sometime around Veteran’s Day. My husband is adamant about not celebrating anything Christmassy until the day after Thanksgiving, while I crank up my favorite Willie Nelson holiday album the minute the Macy’s Day Parade features good ol’ Santa coming down the street.
Whenever you started or think you should start, the holiday season is now full on. The entire month of December is just week after week of wild preparation, celebration, anticipation, and decoration. Each of our senses is attacked by the spirit of Christmas in one form or another, from the prickle of the evergreen needles, to the taste of frosted cookies, the vision of sugarplums, the smell of the dust that comes out of the boxes of ornaments.
But for all of the sensory attacks, nothing does it for me like the sense of hearing. Christmas carols are everywhere you turn. On every commercial, on every station, and certainly hu 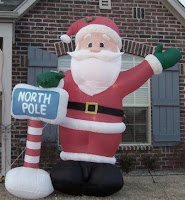 mming in my home.
I grew up with Christmas carols but like most things, I never took the time to listen to what they were about. Certainly the hymns and religious songs tell stories of the night of Christ’s birth. But there are other carols, and I think they have a story to tell, too.
Take “Frosty the Snowman,” for instance. It’s just a song about a bunch of kids who build a snowman who takes them on a crazy adventure thanks to his fancy hat, right? Or is it a glimpse into the magic of the season, into the faith of the imagination of children? For just once I wish I could have a sliver of that, and I think we all feel a glimmer of it when we hear the jingle bells of Santa’s sleigh.
And speaking of “Jingle Bells,” is it more than the most well-known winter song of all time? Set the stage for the story: riding in the snow in a sleigh pulled by horses. There is no motor running, no DVD player reciting Finding Nemo in the backseat. No cell phones ringing, no nothing. The silence is broken by two things (maybe three if that one horse has recently eaten), the singing of the song and the jingle of the bells. Two lovely things that take the riders out of the silence of the cold night and bring them closer together, where we all want to be.
But if there was any song that brings people truly together, it’s got to be “Home for the Holidays.” I never quite understood this one until my own family moved away and the only contact I have with them on those special days is via a phone call. There is no place like home for the holidays, and if you want to be happy in a million ways, you just can’t beat home sweet home. It’s true, and I know this because every holiday, no matter what it is, I couldn’t imagine it without being surrounded by the rest of my family.
What are those million ways? Mostly it’s stuff that means something to you and your own. It’s the traditions that have been built up over the years, of the same person falling asleep after the meal. It’s the comfort of knowing that one relative is going to be secretly fighting with another one and that so-and-so’s kid made the cookies so don’t eat them unless you want to eat dirt and boogers. It’s the kids running to tell their Grandparents about what they did in school and trying to hold off that one person who always like to sneak a look at the presents.
Mostly it’s the good stuff that makes a family, and a family a home, and a home for the holidays. And stuff that fantastic shouldn’t go in one ear and out the other.
Columns