The curse of Mrs. Tiggy-Winkle

- November 13, 2010
To begin, let me tell you why I love the library so much. For one, it’s full of books and music, two wonderful forms of art that in some way appeal to everyone. They have all of the latest newspapers and magazines, movies, and a dusty set of encyclopedias that apparently you can now actually check out without being thrown in prison. It’s also got nice people, the smell of old paper, and has literally any information you want to read and learn.
And all of it is free. Absolutely free.
Of course we all pay taxes that contribute to the success of our own public libraries, but for the most part when we stand at the check-out counter, the only thing we’re whipping out of our wallet is our library card. In essence, it’s almost as if one of those mega big bookstores with their fancy escalators and people walking around with lanyard nametags and Bluetooth ear pieces decided to trade the cash registers for a nifty bar code system.
In fact, my children often get confused between the book store and library and switch the terms “borrow” and “pay.” They have realized one thing, though. When we leave mega bookstores, they’re lucky to have a single book in their hand. When we leave the library, I sometimes have to enlist the help of others to help tote the gargantuan pile of literature out the door.
I, too, throw multiple books in my bag that I know I’ll never have time to read (case in point: Indian Mythology, October 2010) but somehow it just makes me feel better to have it in my hands. 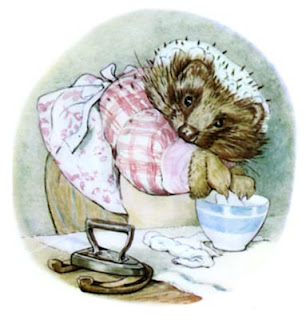 But seeing as though we are library regulars, our stash of books at home tends to pile up. Because, hey, it’s free. Right?
Wrong. And thus is the curse of Mrs. Tiggy-Winkle.
The Tale of Mrs. Tiggy-Winkle, a lovely little book by Beatrix Potter, made its way into our home a few years ago and unfortunately never made it out. I was aware that I needed to return it to avoid the overdue fines, but with each Tiggy-Winkle-free day, she continued to be in hiding. So I renewed, and searched. And I renewed and searched again, tearing apart every room in the house, every inch of my car, every couch cushion and purse that we owned. But eventually, the day had arrived.
I hung my sorrowful head and walked up to the counter.
“I lost Mrs. Tiggy-Winkle,” I said in hushed tones. “I can’t find her anywhere. She’s MIA, AWOL, gone, astray, utterly vanished into thin air.”
“Tsk tsk,” and I filled out a little card and paid the fee for the entire book, which was more a crush on my soul than my wallet, but still. I had lost a piece of literature that no other child would ever have the pleasure of reading, and everyone deserves a little Tiggy-Winkle, who if you’re wondering, is a sweet little hedgehog who works as a washwoman.
I know about her because the very day after I shelled out my pride and a few bucks, I found her smiling little hairy face poking out from behind my own bed. How the book ended up there I’ll never know, but to this day I can see those beady little washwoman eyes staring me down and saying, “tsk tsk. Always remember to keep tabs on your library books before it’s too late.”
Generally speaking, I can always gauge my state of well-being on my library fines. When I’ve got too much on my plate, it never fails that I’ll get a notification of something overdue. The more on my plate, the higher the fines, and the stronger the reminder that life is cheap, but it’s not always free. It’s my universe’s way of telling me to slow down, organize, and clean behind my bed before Mrs. Tiggy-Winkle shows her fat little face again.
And when she does, she’ll probably also tell me to do the laundry instead of spending so much time at the library.
Columns

Bonnie Way aka the Koala Mom said…
Aw, very cute! Mrs. Tiggy-Winkle is one of my favourite Beatrix Potter tales. I used to mark due dates on the library so that I would get books back on time. Then, just before we moved, I borrowed a book for Sunshine... and it got packed by someone who was helping us box books. I had to tell the library what had happened and ask them to wait for us to get to our new house so that I could the book in all the boxes and mail it back. Whoops!
November 14, 2010 at 1:21 PM