What do you want to be when you grow up?

- October 21, 2010
There was a time I would have given anything for a refrigerator box. They were worth their weight in gold, and whenever someone in the neighborhood got a new appliance they were quickly snatched up by imaginative children and moms desperate to contain those same kids. My containment unit was none other than a fully equipped boat with a high-powered motor, CB radio, ropes, maps, and a hook for my Smokey the Bear hat.
It was my park ranger boat. And against the will of my parents, it lived for many months in the middle of our family room, where I sat daily and discovered unchartered wild waters and forests, and wrote tickets for people who cut down trees.
Besides the boat-box, I also spent many hours toiling behind the secretary desk of my father’s work. I had an old broken (and gigantic) calculator that used to ring up prices and an inoperable rotary dial phone that rang constantly and at times I was scheduling appointments and adding numbers. Life was busy, but it was just so much fun to play pretend job.
Why ever did we as children think it would was fun to work? Instead of playing games and coloring pictures, I spent my hours on boat patrol and getting paper cuts. I think society in general tried to brainwash across the span of generations because I grew up thinking work was fun. Even our toys became work items—a tiny light-bulb powered oven to do the baking, a vacuum cleaner, a lawn mower. We grew up pretending to work and actually liking it. I sometimes wonder if it was subliminal messaging done in the cartoons to improve the overall work ethic of our nation because I wasn’t alone, either. 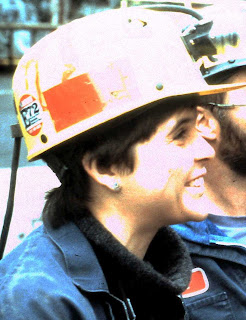 A quick survey of friends shows that most of us had dream jobs that we imitated when we were young. A dolphin expert, a teacher, a banker, a feed-mill operator, cashier, veterinarian, pirate, and even someone who wanted their job to be naming the color of nail polish. All wonderful and exciting jobs when you’re a kid. (Although I admit that training dolphins and being a pirate sound pretty exciting even as an adult.) And of all of us, not many of us made our dreams come true. The occasional teacher, the waitress, maybe even the writer. So what happened? When did reality finally hit and we give up our dreams of being a secretary in a high-rise building on 5th Avenue?
Maybe it was the discovery that training dolphins would take us far away from our home or the possibility of spending years in a wet suit, but probably not. Maybe it was the realization that naming nail polish wasn’t something to make a career out of. Maybe it was the pay scale of a cashier vs. a veterinarian or figuring out that while being a pirate might look really cool on TV, the thought of wearing balloon pants and an eye patch didn’t quite match your mature personality.
As for me, I’m not really sure why my dreams of being a park ranger didn’t outlast my refrigerator box, but I do know that I’m so glad that no one ever burst that bubble. I won’t say the dream is gone, more like it just moved over and made room for other dreams along the way to adulthood. So when I see my own children hard at “play” emailing potential clients or stacking firewood for their guided hunting expeditions, I shake my head and wonder how long they’ll hold on to those dreams.
I hope forever.
Or at least long enough to earn lots of money and buy refrigerator boxes for every kid on the block.
**Note: I realize that the picture of me in my coal mining days has nothing to do with this column directly, but starting in about 3rd grade, I knew I wanted to be a geologist. So I might not have lived out the park ranger dream, but for sure got my kicks in a coal mine.**
Columns

Bonnie Way aka the Koala Mom said…
I think kids think work is fun because they see their parents doing it, and anything that Mommy and Daddy spend so much time on MUST be fun, mustn't it? Right now, because my husband and I are both students, Sunshine wants to go to school. She gathers pens, papers, and other random things (including a foot-shaped calculator she calls her phone) into a "purse" or basket and tells me, "I go to school now." :)
October 23, 2010 at 5:09 PM