Raising a pack of dogs 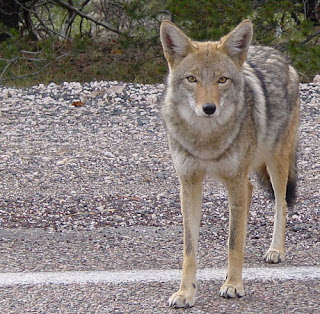 If you’re out running errands or at the park or library, and you hear someone saying “coyote!” repeatedly in increasing volume and intensity, don’t panic. Chances are there is no coyote running wild among the aisles of the supermarket or stalking the teeter totter.
It’s just me, telling my kids to be a coyote for once.
Not that it’s a standard thing for a mother of three to do, but an introductory class to basic animal tracking has opened up my eyes to a new and exciting hobby. A single footprint in a muddy or snowy area is a natural mark of what was once there when I was not, something so simply poetic I can’t help but immediately squat down and stick my nose in this beautiful trace.
From a set of tracks, one can not only determine the animal, but whether it was male or female, its mood, where it was going and why, and if you’re really, really good, even if it had a full belly.
Mostly I’m happy knowing what kind of stuff ate my garbage and walked through my flowerbeds.
One special thing I learned was to how to tell the difference between a dog and a coyote track.
Not native to Ohio, coyotes are now present in all 88 counties. Quite beautiful but considered dangerous by many, the footprint of this wily creature looks a lot like the kind of canine beasts that distribute dog hair in every corner of my life. So how can you tell them apart?
For one, coyote are usually running or jogging, so that only the two center claws show up in the track, as compared to a dog’s print that tends to consistently show all four claw marks.
Secondly, the coyote tends to know where it is going. It makes a decision, and acts upon it in with great intent. Compare this to a dog, who in walking from point A to point B might sniff around to every other letter of the alphabet before actually getting to where it is going.
Compare all of that to my children and I realized that I am raising a pack of dogs.
For example, a simple command such as “please go upstairs and get ready for bed” to a coyote would mean to actually go upstairs, put on pajamas, brush teeth, get a book, and climb in bed. But to my pack of dogs? Not so much.
They walk towards the stairs but get distracted by a toy they may have left under the couch, so they crawl under to get it. From there they may again venture in the correct direction, but suddenly find themselves trying on old Halloween costumes instead of getting their PJ’s. Eventually they come around and each are donning the correct clothing, but we lose them again with the whole teeth brushing. I swear, you give a kid a mirror and all purpose disappears and they magically turn into movie stars. Singing, dancing, staring up their noses, putting in hair clips, sometimes just standing there making faces. All of it a fantastic time waster to a coyote, but par for the course for our sweet doggies.
With teeth finally brushed, they settle into where they should be, but not before zig-zagging around the entire house, leaving invisible dog tracks in every direction, none with reason or purpose.
Truthfully I can expect no other. Children by nature must be doglike, for I don’t think I’ve ever met one who isn’t. Sadly, becoming a coyote must happen with age, because I know when I get a chance to head to bed, I make a direct beeline. Perhaps I’m just exhausted from an entire day of running and yelling out the names of carnivorous, non-native animals at my children, trying to get them to move with intent and break the obvious laws of nature.
Columns Mama thoughts Nature

The Starr Family said…
Coyote would be the craziest thing I've heard shouted in a grocery.