Letters and laughs are a lost art 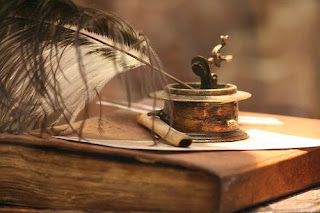 At the risk of sounding too old fashioned, I would like to throw in my two cents when it comes to lost art forms. ­(Picture, if you will, me sitting in a rocking chair on a front porch, rubbing my aching knee and starting this next sentence…)
“Back when I was little, we didn’t have those fancy email forwards. If we had something funny to say, we actually had to say it. Out loud. In front of people. Over time, sure there were those blue ditto machines and eventually the fax, but still. If you had a joke, you told it, not read it.”
Because really, when it comes to jokes, when is the last time you’ve heard one delivered with poise and timing? People just don’t tell jokes anymore. We just forward them, some of us with fourteen pages of past recipients situated right at the top to really kill the moment.
My grandparents had a friend who was large, loud, and Hungarian which meant nothing except that his family served chicken paprikash a different way than we Polish folk did. But this guy, with his booming voice, could tell a joke like none other. Even as a small child I remember sitting in his basement, drinking my ginger ale when Mr. S. belted out a side-splitter. He could hold it together through the whole thing, even through the punch line, while the rest of us (even those who didn’t understand what he was talking about) slapped our knees at the very delivery.
Mr. S. isn’t with us anymore, and I’d bet my bottom paprikash that neither is the way he could pull a joke out of nowhere and perform it with the grace of Bob Hope and the nose of Jimmy Durante. Somehow as a society we’ve lost that talent, so much that I’d go as far as to say telling good jokes is a lost art. If three guys walk into a bar and one ducks, is anyone there to laugh?
I don’t understand how, but I can tell you the “why” of the answer. It’s the rotten and oh-so-convenient thing called e-mail. Instantly we can send something to one friend or many. With the click of a button, we transfer doctored-up images of billboards and old ladies not to mention a long scrolling story with a killer punch line that gets lost in translation until you re-read it three times.
Because not only is the art of telling jokes long gone, so is the art of writing letters.
I’m talking about actual pieces of paper with actual pens, complete with smudges. These are the correspondences that honestly prove that someone cares about you enough to force them to not only cramp up their hand (because no one actually writes anymore) but also shell out the big bucks for a stamp.
There’s patience involved, and a thought process that doesn’t include a simple backspace. There’s the meaning that someone took the time to say what really matters and had to really think about spelling and punctuation because there’s nothing automatic about a sheet of paper.
My oldest daughter has a pen pal in Virginia. The two of them write back and forth, send rubber bracelets and post cards from vacations. Nothing exchanged is very exciting; there are no deep secrets or outpouring of souls. But still, every single day my kid asks me if she got anything in the mail, even if she just sent her friend a letter the day before.
Maybe it’s the tangible feel of the paper in your hands, the sound of the envelope ripping, the knowing that what’s inside isn’t a bill or an application for an obscure credit card. Whatever it is, it’s a wonderful thing that is fading away a little more with every @ and .com.
Back on that rocking chair I go, creaking away and complaining about the weather and the youngsters of the day, with their fancy electronics and all that. Wouldn’t it just be something if the mailman came up and delivered a hand-addressed envelope and told me a belly-splitting joke at the same time?
Columns