Late Summer eating habits are sweet and anything but corny 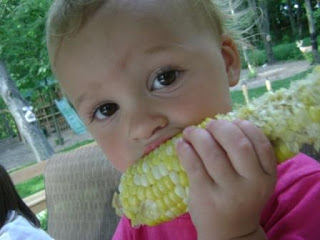 My husband isn’t much of a picky eater. He’ll eat pretty much anything I put in front of him, and he never really puts in specific requests for certain foods.
Except in late summer.
It’s as if there’s some unwritten rule that when the end of July and early August roll around that we Ohioans have to eat our own weight in sweet corn. Sometimes we even make an entire meal out of it. Surely it’s unbalanced nutritionally, and surely our digestive tracks cringe at the very thought of it, but in late summer, it’s just something you have to do.
As far as I can figure, people have been swarming over corn for hundreds of years. An elementary school history lesson will tell you that when the settlers came over to this great land they were in search of religious freedom and the chance at wealth. Really, I think they got a good whiff of corn blowing across the Atlantic and followed their noses to the real gold: corn.
People on this side of the world have been eating corn for thousands of years. Literally. The oldest remnants of corn were dated at 7,000 years somewhere in the Mexican Valley. Back then, scientists figure that corn wasn’t anything like the delicious varieties we have today. They were much less sweet and succulent and I reckon that somewhere, in the history of mankind, there must be cave drawings and stone carvings that translate to “we need to figure out cross-breeding and hybrid agriculture and get us some good sweet corn.”
Because that’s exactly what happened.
Sweet corn as we know it has been an evolution over generations of harvests. Records show that the first sweet corn grown by the colonists wasn’t until around 1800 (give or take a few years) and before then their varieties were less than tasty. Probably more like the corn I used to sneak out of the fields behind my house when I was a kid—they grew field corn and sweet corn and my untrained eye couldn’t tell the difference, especially while sprinting through the woods in full camouflage because I was so afraid I’d get caught for taking a single ear of corn.
But once sweet corn and its seed hit the colonial market, those freedom-seeking Americans were free to bear arms and eat as much sweet corn as they could grow. The rest, we say, is a long history that was only improved upon by continually sweeter hybrids, and a few crucial inventions that greatly enhanced American’s corn eating experience. These are, in no particular order, the invention of dental floss (early 1800’s), the invention of those little prongy things you jab into the ends of the corn so that your hands don’t have to touch the steaming hot ear but certainly your mouth will enjoy the scalding temperature, and finally, the granddaddy of all inventions, the corn butterer that holds a handy half stick of butter with a special curved end so you can easily glide the greasy deliciousness all over that beautiful golden ear.
The corn butterer plays a special and significant role in our house. It only comes out during the peak of corn season, when the giant pot has a permanent place on the stove and the dental floss is left out on the bathroom counter. And as soon as the kernels start acquiring that starchy taste and texture, we sadly know that the great feast of sweet corn has come to an end. It’s a short and wonderful time, and one that we are thankful for and are happy to take advantage of.
And so, to the great farmers of the sweetest corn around, we raise our little prongy things and our corn butterers in your honor. It is because of your hard work and dedication to this fabulous vegetable that we are proud to have silk in our teeth and butter dripping down our chins which, in my opinion, is the ultimate salute.
Columns