From fuzzy to curly to welcoming spring 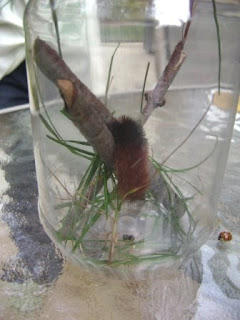 There’s no pretty way to say it.
I’ve been keeping a potential corpse on the back porch. Since last fall.
It was a beautiful fall day and there, crawling by the woodpile was a the surest sign that winter was approaching: the wooly bear caterpillar.
Brown and/or black, it is supposed to foretell the harshness of the winter that lies ahead. The more black, the more cold and snow we’d have to deal with. The more brown, the more mud that would accumulate on all of our doormats.
We decided to name her Isabella, for reasons you’ll soon understand, and sacrificed a plastic jar we usually use for shaking cream into butter on Thanksgiving. I plugged in the drill and make a dozen small holes in the top for our new friend. We added a few sticks for it to climb on and a few freshly picked blades of grass.
“Welcome to your new home, Isabella.”
I’d never done it before, attempt to keep a wooly bear over the winter so that it would “hibernate” through the cold and then wake up to spin a beautiful cocoon when the weather was right. Some of my books said it was entirely possible, and I with the possibility of teaching my children a beautiful lesson in science and nature, I couldn’t resist.
“Keep the jar outside in a shaded place, out of direct wind and weather. Change the food out every day or so and keep the jar clean of waste until it looks like the caterpillar has curled up and died.”
And so we did.
We took turns feeding Isabella, took her out for little play sessions, let her crawl around our fingers. Of course I was the only one brave enough to dump out the droppings. (And if you have never seen them, they are bigger and more abundant than you’d think.) The jar sat on the back table, and we’d check on her every so often to see if it had curled up and died yet.
Sometimes we thought it was just sleeping or faking, so I’d gently poke it with a stick and it’d wiggle its little legs as if to say, “stop it lady. Can’t a caterpillar get a little rest around here?”
But eventually, one day the stick poking resulted in nothing, and I finally declared that Isabella was either dead or sufficiently sleeping for the winter.
We cheered and danced and I was pretty happy I’d have to stop dumping caterpillar poo out of my butter shaking jar, which incidentally we will never use for butter again, so don’t worry. The jar got pushed to the back corner of the table on our back porch, and there it has sat. All winter long. Without any attention given to it whatsoever.
Last week I happened to walk out the door where I’ve walked many times and for kicks I turned to the possibly dead caterpillar and gave it a closer look.
It was mostly brown, with a no larger than normal black stripe. I informed my deadish friend that while it made one great science experiment, it was no grand weather forecaster, and I walked on, leaving it curled up and motionless, for another day.
If the activity in the book worked, at some point when the caterpillar decided the weather was just right, it would wake up. We would need to notice this and again start taking care of it, giving it food and making sure the sticks were just so, so it could climb up to the top of one and start spinning its lovely cocoon.
After a certain amount of time, an Isabella Tiger Moth should emerge, a very plain and rather boring standard moth. It does not have nearly the traits or the lore of its crawling counterpart, but that won’t stop us from keeping watch, daily, for the magic of nature to start happening.
Not only would it be absolutely amazing, it would also mean that spring, sweet, spring, had finally arrived.
Columns