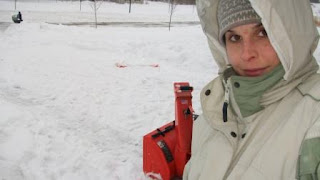 I have a friend whose husband actually turned my name into a verb. As in, “just go Karrie McAllister the thing, already!” For some reason, this family was under the impression that I was the one female that they’d met who knew no boundary when it came to what was “woman’s work.”
I think it was probably because at a playdate I randomly fixed their toilet or their garage door or something, really impressing the husband with my handy skills.
It didn’t help them to know that while she grew up in a feminine way, I took the tomboy route. I got knives and GPS’s as presents, and by the time I was in middle school I already had my own four-wheeler and rifle. My first job out of collage brought field mice, coal dust, and dynamite. Grrrrr.
So feeling like an empowered woman is just a way of life for me. I pull start my own lawn mower, for Pete’s sake. But there has always been one area where I have lacked: the snowblower.
Over the years it’s become an ominous beast, sitting serenely and untouched most of the year on the side of the garage. It’s only when my husband takes a rare trip out of town that we get blasted with the world’s worst snowstorm that the thing would really come in handy.
Knowing that he’d be gone and knowing that the storm was coming, I requested specific directions. Choke, yes. Plug, yes. Rabbit, yes. Button, yes. Good. Got it.
And away he went to warmer weather while we watched the world silently disappear under a blanket of white.
“Today’s the day!” I said to the kids! “I’m going to snowblow the driveway!” I cheered in a way that those words have probably never been cheered before. I stuck my camera in my pocket to record the entire event and headed out into the garage.
I went through the steps and without blinking twice the machine started up and growled its empowered growl.
I growled back. I was going to “Karrie McAllister” this thing! My name did deserve to be a verb!
Making my way to the driveway, I squeezed the throttle handle only to find that nothing happened. Quickly reviewing the directions, I was sure I was doing everything correctly, so I must just not be as strong as my husband.
So I squeezed a little harder. And harder still, until, with the strength of my own left hand I completely bent the metal arm which holds the cable and ZING! an end cap went flying off somewhere in the 47 feet of snow we had.
I was not snowblowing. Instead, I was somewhere between curse words and tears sitting right on the edge of determination.
Apparently it’s harder to bend steel back the way it came, but with the fiery feeling that my husband was going to wring my neck, I somehow managed to semi-return the handle to its semi-original position. I just needed to replace that end cap. Tearing through every nut and handy-dandy-doo-dad we had, I found absolutely nothing that would fit.
Think, think, think. A little lightbulb went off in my head. I dried my eyes and rushed to my craft supplies to find exactly the wire I needed, the kind that I normally use to embellish silverware with colorful glass beads. Whudda thunk that the same wire could repair a snowblower? I have pictures to prove it. 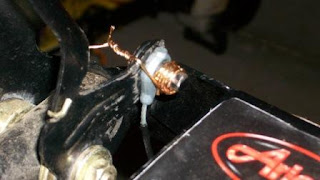 THE FIX...
So with the grace and craftiness of Martha Stewart and the handiness of MacGyver, I pieced the machine back together and slowly but surely cleared my driveway of snow, stopping only for the occasional snapshot to prove to any disbelievers that I indeed conquered my fear. I indeed “Karrie McAllistered” the driveway.
My friend will be so proud. My husband...not so much. 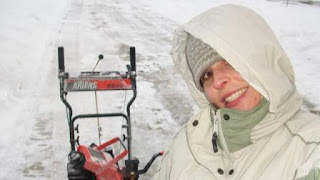 The Starr Family said…
*spits over her shoulder* Yeah, get 'em Karrie.