The Mom who Stole Winter

- January 11, 2010
Every Kid down in Kidville liked Winter a lot…
But the Mom, who managed the Kids, did not.
The Mom hated winter! The whole snowy season!
And if you want to know why, she’ll tell you the reason.
It wasn’t always this way, no she liked the snow quite.
She snowboarded and skied and prayed for the white.
She spent most every day that the winter winds blew
Out in the cold. It’s what she liked to do.
But then came the children, one after another
Until there were three to be cared for by mother.
When there was just one, it wasn’t a problem at all.
Cute sweaters and knit hats to wear in the fall,
And then when the snow fell, no one minded the least.
There were two little boots and a suit made of fleece.
But soon after that, another babe to adore.
And those two little boots soon became four.
And two little hats, and four little gloves,
And two little noses to wipe clear with love.
And each time the small family got ready to leave,
It’d be five extra minutes to tuck each coat sleeve.
And five minutes more to find a lost hat
And five minutes of boots and gloves after that.
It took hours to even head out the door,
Yes, the Winter was becoming quite a dull chore!
And then it got worse! Oh my, oh dear me,
The two little children then became three!
Six boots, six gloves, three hats and a muff,
This Winter weary Mama had soon had enough!
The Kids down in Kidville, with each flake of snow
Begged her and begged her outside to go,
To play and to sled and to have snowball fights
In a wintery wonderland so wonderfully bright.
But the Mama, how angry, she loathed even more
The wet, soggy jackets that would soon grace her floor.
She hated the slush from the boots they’d trudge in,
And she crinkled her nose and said with a grin,
“No outside play. It’s just far too chilly.
Besides, playing in the snow is just silly silly silly.
You get wet and get cold and your nose runs and drips.
Stay inside instead. I’ll let you eat chips.”
She thought she could bribe them with saturated fat,
But the Kids, delightful, were too smart for that.
The smallest Kid, she knew what to do,
Dear little Kid, who was no more than two,
Looked up at the Mama with big puppy eyes
And said just the words that were no surprise.
“Puh-weeze?” said the baby, “puh-weeze go outside?”
“Mama get sleds? Together we ride?”
Begrudgingly she grabbed the large plastic bin
With hats, gloves, jackets, and snowpants within.
They donned their gear, Mama grumbling away,
And 20 minutes later, they were outside to play.
Sleds and shovels and snowballs did pelt,
And something strange happened, the Mama did melt.
Away went her grinchness for the season of cold,
Away went her whines about being too old,
Away went the complaints of the work to be done,
And all that was left was a sled full of FUN.
The Grinch that was Mama remembered that night
Of what a good time it is to play in the white!
And there, in the driveway, cheeks all rosy red,
She stole every last turn of the Kid’s racing sled
And tore down the slope in the snowy front yard
Thinking the dressing and cleaning work that’s so hard
Is worth it for one single ride when you hit Mach 4…
And the Mom who stole Winter would steal no more. 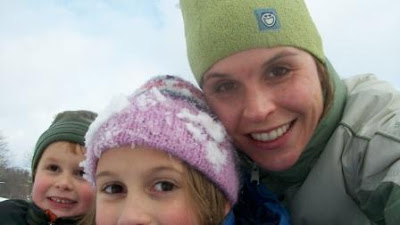