- January 15, 2010
Avid readers might notice that I recently changed the name of this blog. I wanted a catchier name, something that summed it all up in one happy little phrase. After much deliberation and a vote or two, "dirt don't hurt" won, hands down.
It comes from the saying, "God made dirt, and dirt don't hurt," something that I've heard and said over the course of my lifetime, mostly when someone in the crowd is ewwwing about dirt somewhere on their body.
Personally, I love dirt. It's good fun stuff, especially when it's got a little water mixed in with it. I know this because I have many photos of myself, all pretty much looking like this one (taken waaay back in the late 90's) 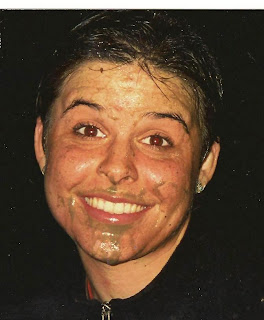 I also know I love dirt because I refuse to wear gloves when I garden and boots in the creeks. If you've felt the good feeling of dirt under your nails and between your toes, you know what I'm talking about. If you haven't, you should.
My children are learning these life lessons, too, and for that I am quite proud of them. The bathtub water is usually the lovely color of dull chocolate milk and I challenge anyone to find a pair of my son's pants that don't have a hole or a stain on at least one knee.

But beyond the actual love of dirt, there's something else to the "dirt don't hurt" phrase. I'm taking it to the next level, in my own smalltown, backwoods way. Consider it a non-latin Carpe Diem, where instead of walking around the puddle, you jump, as hard as you can, right in the middle of it because tomorrow, that puddle might not be there.

That's the good thing about dirt. It washes off (usually), and most of the time, doesn't hurt a single bit.
Mama thoughts

The Starr Family said…
A little dirty, but your dentist would approve of those sparkling white teeth! My lands Karrie... who takes a picture that good covered in mud?
January 15, 2010 at 6:44 PM

Unknown said…
Dirt is good for you! I grew up running around my mom's garden, barefoot. I have sat in my share of bathtubs with a gritty bottom from all the dirt! lol

BECKY said…
Karrie..you are the only person I know who is cute enough, and brave enough to post a picture like that of yourself for MILLIONS to see!!
January 17, 2010 at 11:07 AM