Wedding crier gets the job done

- November 22, 2009
There are two sorts of criers. There are the type that release the most delicate tears that peacefully roll down their cheeks in a quiet and dignified sort of way, and then there is me.
I am a quivering, snotting, can’t-catch-my-breath sort of crier which works quite well for watching chic flicks at home alone, but isn’t great when I am standing up for a friend at her wedding.
I recently had my first ever duty as bridesmaid, a job that most girls loathe. Having never had the opportunity to wear an ugly dress, I was doubly elated when asked to be a matron of honor. Sure, I’d been a junior bridesmaid as a ‘tween and a bestman for a best friend in college, but never once had the opportunity to adjust a flowing train or carry a supply of lipstick.
My dress was my own choice, and at the store I knew I needed something practical, mostly floor-length to cover my pasty legs, all bruised up from soccer balls and toddlers. The dress itself was gorgeous, but it had one downfall: no pockets.
Not that fancy dresses normally have pockets, but my job description included holding the ring. I really needed a place to store not only the ring, but also the tissues that I knew I was going to need during the ceremony. Thankfully, the “bridesmaid” standing next to me was a “bridesman” whose suit had plenty of pockets, and it was decided that he would hold the ring. The two of us would make a stealthy spy-type handoff during the vows. 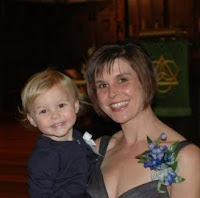 I was thinking that I could hold the tissues I knew I would need around the flowers, but, just my luck, no flowers for the bridesmaids. I felt like a soldier going into battle without a weapon. But desperate times called for desperate measures and I carefully folded two tissues into flat little squares and put them, well, um, in a place where I didn’t really want extra padding but didn’t have any other options.
As the ceremony began and the bride’s father escorted her down the aisle, I felt my chin begin to shake and I had to stare off into space and think about odd things like cheese and sweaters to keep from losing it at that precious moment when the father hands his daughter off to the groom. When I made it through that most difficult part, I thought I was good for the rest of the ceremony.
But then the vows began. The bride handed me her bouquet, a beautiful bunch of blue flowers, only about the size of a volleyball.
And as the words of love flowed from the couple, I felt that unmistakable lump in my throat and I knew I was going to lose it.
Doing my very best to be one of those quiet drippy criers, I reached back, as planned, for our secret handoff of the ring. Instead I was handed a gigantic wad of tissues that I promptly filled with my own tears etc. and reached back again for the ring.
The service continued and after the lighting of the unity candle the bride, who apparently is one of those lucky peaceful criers, turns to me and asks for a tissue, which is a problem because the 15 of them in my hand are now full of less-than-pleasant materials.
Knowing that a matron of honor is there to serve the bride on her very important day no matter what, I attempted to move the flowers in front of my chest, and I reached down and in and pulled out a neatly folded tissue and handed it to my friend. Mission accomplished.
Later I polled the audience and the groomsmen. “Did anyone see my pull a tissue out of my dress and hand it to the bride?”
“No,” answered the best man. “But we were all taking bets on how long through the service you would make it until you cried. I thought you’d make it through the whole thing.”
And at that point I knew deep down I had not only won, but prevailed. I smiled, and then ran off to pin up a bustle.
Columns