- August 29, 2009
Confucius says, “respect your elders.” If Confucius would have met my grandparents, he would have said, “respect your elder’s right to party.”
I only know this because of a recent visit to my grandparents’ house, where I swear they outlasted, outsang, and outdanced me. And they are well into their 80’s, working with hearing aids, plastic knees, and orthopedic shoes. I, who can hear quite well, sat in a folding chair and smiled in complete awe.
We arrived at their home in which is situated in a giant retirement complex only to find their entire garage emptied and their car and precious golf cart missing. “Oh, they’re at the neighbor’s,” Grandpa said. “More room for chairs.”
A closer look showed me that my uncle, another visitor to their home, had set up his guitar and karaoke machine and planned on singing the night away for the 70+ crowd that would be arriving later, armed with canes, diet soda, and chip dip. The neighbors were all coming over for a sing-a-long.
“Oh, boy,” said my husband.
We helped gather every chair my grandmother had and set them in a giant circle around the outside of the garage. The middle, I was told, would be for dancing. Visions of shuffling feet and walkers came to mind, maybe someone dragging an oxygen tank. I was thankful my husband knows CPR.
But the night went on. The bowls of chips were set around, someone brought brie cheese which half of the older crowd couldn’t pronounce quite right, and the distinct sound of corks could be heard popping in the kitchen. It was going to be a party, the kind we weren’t quite ready for.
The music played, my uncle picked his favorite songs and before the end of the very first one, there were already two women dancing, the truest sign of a good party. Soon enough, the few young children in the crowd took their bowls of corn chips and snuck away in embarrassment as their grandparents did the jitterbug. Later they returned as spies, keeping notes of the entire event:
“Old people are dancing. Old people are singing. My mom is dancing.”
Before long, a man who had suffered two strokes and a broken hip and wrists stood up to dance with his wife. As if that wasn’t enough, my Grandfather who can barely walk, soon pushed himself out of his chair and grabbed my incompetent hand. He twirled me around the honky tonk [garage] floor and though he can’t even pick up his feet, his dancing skills far surpassed mine. But for the smile on my face, the humiliation was all worth it.
Sitting down, I watched my Grandpa take my Grandma’s hand and their son played and sang one of their favorite songs. Not many moments in a lifetime make such an impact, but seeing what true love looks like after 62 years of marriage? Wow. Pow. So that’s what fireworks without a fuse look like.
It didn’t take long for the women to start grabbing the microphone, and start belting out “You Are My Sunshine” in fifteen different keys, all at different tempos. Their husbands clapped loudly and smooched them and sooner or later, I got up to sing my Grandma’s favorite song. I only hope I made her proud as she made me.
I watched my children get sleepy and a few people shuffled home from the garage turned dance hall. The chips, soggy from the heat and humidity, were put away and the chairs folded up.
“Well, everyone’s gone,” said my grandparents. “Doesn’t mean the party’s over!” And we sang into the night as the tree frogs came out and my own eyes got droopy.
I went to bed before my 80-something year old grandparents. Embarrassed? Nah. Role models? Definitely. Put that in a fortune cookie, and party on, Grandma and Grandpa. 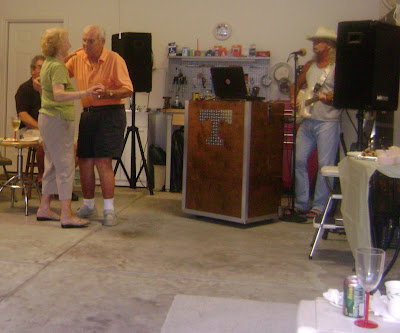