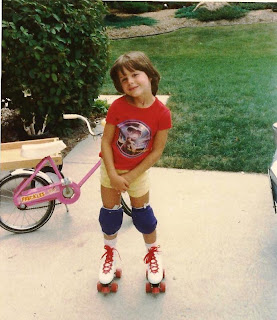 It occurred to me just the other day that I’ve really only got a few years left of being cool. Soon enough, the fact that I can bust into a twirling jump rope on the playground or tell a killer knock-knock joke isn’t going to get me very far. It’ll probably happen about the same time that I am done changing diapers, cutting up food into very tiny pieces, scraping oatmeal off of the bottom of the kitchen table and reading books made of cardboard.
And just about the time that I start celebrating my new found freedom from the rigors of raising young children, I’ll realize how very sweet it was and how very much I miss it.
So this summer, when the children are all officially home from school and my house becomes a Mecca for popsicles and muddy footprints, I have decided to take it all in before it vanishes as quickly as a newly mopped floor.
It ain’t gonna be easy.
I know how I get wrapped up in my own agenda with simple little things that are a really big deal to me. Things like eating fresh food off of clean dishes. Or wearing clothes that don’t stink or aren’t visibly filthy.
A study done around 2007 showed that mothers today spend more time per week focused on their children compared with the 1960’s, a whopping 14.1 hours per week to June Cleaver’s 10.2. The same study found that modern moms spend 40% less time on housework than their 1960’s counterpart, which explains why my house is always so messy and probably why I don’t wear frilly aprons. Whatever time that is spent doing housework still seems to me like it’s never enough. There is always one more chore waiting for me, one more dust bunny calling my name and laughing at me while I use a butter knife to scrape the oatmeal off of the underside of the table.
But frilly or not, I’m ditching the apron for the next few months. Not only is my kingdom of cool waning, but my children are at the most perfect ages (1, 5, and 7) for crazy summer fun, the exact kind of summer fun that we all want to have but never quite seem to make the time for doing. We’re too busy with this or that. You know, the whole “cat’s in the cradle” syndrome that our parents sang about back when we were kids.
It is with great pride that I share my summertime pledge. Feel free to set the paper down and raise your own right hand, put your left hand on a bottle of bubble soap and recite this with me:
“I, [state your name], do hereby declare this the summer of renewed childhood. I promise to let the mail pile up on purpose and play outside at least once a day. I vow to have a stockpile of water balloons, squirt guns, sunblock, bug spray, popsicles, sidewalk chalk and Frisbees, and to participate in every game of Freeze Tag and Hide-and-Seek that I can find. I will chase after the ice cream man and stay up too late looking at the stars, grass-stain at least one pair of jeans and ruin one pair of shoes by stepping in creek mud. I will touch a frog, catch a lightning bug, and put X’s on my mosquito bites even though I know it doesn’t do a darned thing. I will make an entire meal out of marshmallows and potato chips and drink fruit punch so bright that it nearly glows. I will do this all because I can, because I should, and because next year I just might be the giant nerd my children don’t know about yet.”
And then I will take a nap.

The Starr Family said…
Amazingly, I stumbled upon your blog in search of local bloggers (I'm from Wooster)... I always followed your hilarious stories/adventures in the Bargain Hunter. Miss seeing them... excited to find you on here!
June 2, 2009 at 8:18 PM

Jenny G said…
You are a smart mama. Milk every moment!! They do grow up too quickly and the sun will not rise and set on every word and idea from you when they hit those "T" years. If I could have bottled those years I would have. Ages 16, 19 and 21 came way too fast. Enjoy!!
I Love reading your blog because it takes me back to those times.
J
June 5, 2009 at 11:44 AM