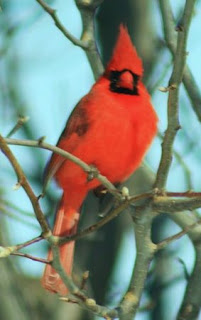 I’m generally not a morning person, known quite well in these parts to be totally nonfunctioning before my coffee. So you can only imagine what sort of demeanor I exhibit when I am woken up extra early by the tap tap tapping on my window.
It seems it is nesting season in the world of the cardinal, and my yard must be prime property because there are definitely some cardinals in the market for a new residence. Male cardinals, in establishing their territories, get a little testy during these weeks. They want to make sure that their spots are claimed, that no other males get anywhere near their ladies. They want to make their mark.
But this one very fierce cardinal keeps making his mark…on my doors and windows. That tap tap tapping that is so unpleasant in the wee hours of the morning is the bright red bird attacking his reflection and flying full bore at my house until his beak runs right into, well, himself.
Any quick look at a nature or birding book or site will tell you this activity is pretty common in the spring for birds like robins and cardinals. Their little brains aren’t smart enough to know that the other bird that is invading their turf is really just their own reflection so they return, again and again, for a red breasted wrestling match. This goes on and on until a) something is hung on the outside of the window to break the reflection, b) the nesting season ends, or c) the bird takes one last shot and finally knocks himself out.
Right now, there’s been no change at my house. I haven’t hung anything, and the bird has yet to do himself in. I still see that little guy out on my back porch, hopping around on my patio furniture, dancing like a boxer in the ring. “Float like a butterfly, sting like a bird” I can almost hear him saying, and I picture him wearing a shiny silk cape and gearing himself up for that fateful flight towards his enemy.
“Bird brain,” I say to myself, but really, would I do any different?
Not to compare myself to my feathered friend, but I can’t honestly say that, if I was trying to protect something or someplace, I would do anything different.
Being a mom who is constantly on the lookout for her kids, I act about the same as that bird. If someone tries to encroach on my family in any sort of way. Any good parent knows that there are plenty of things that are learned in school that have nothing to do with the three R’s, unless the three R’s are disResepct, Raunchiness, and unResponsiveness…we all know that one kid who talks back, cusses, and stares into space when questioned. So we do our best as parents to protect our child’s territory, trying to keep the bad guys out and the good manners in.
It’s animal instinct we’ve got, that insanely annoying bird and I, to do what it takes to protect what we love.
There’s an old superstition that states that a bird in the house is a sign of bad luck or death. I’m not one to get wrapped up in superstition, but I might subscribe to it if it was talking about the bird that keeps tap tap tapping on my window. Protecting his territory I can appreciate, but not as much as I appreciate my sleep. So if his incessant flying into my window is a sign of death, it surely must be his own; because if he doesn’t do himself in, I may wander down in a tired stupor with a frying pan in hand.
A girl’s got to protect her territory, right?
Columns Outdoors