Sugar is sweet and so is maple surple...take 1

- February 25, 2009
Roger Miller fans unite!
The trees were tapped a few days ago, and we're all patiently waiting for those sweet weeks when the nights are cold and the days are warm and the sap runs like the nose of a teething baby. (OK, that's kind of a gross analogy, but you all know what I'm talking about!) 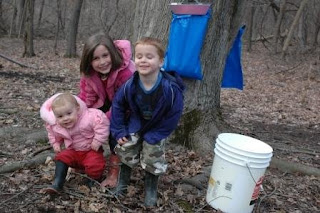 Today was one of those days, and in the after school sunlight, we all donned our mucker boots, which I don't refer to as "shit kickers" when the kids are around. Even little Annie had some of her own. They came up to her knees and she took a nasty tumble down the hill in the mulch, but hey. It's all part of the out-of-doors, right? I'm just breaking her in.
There's something theraputic about collecting sap. For me it falls under that whole "something from nothing" concept because it really does just seem to appear out of thin air. As if we could have stuck a little metal tube in a rock or the ground or the thin air and sap would come out. So walking around lugging the giant collecting bucket is one of those things that makes me feel rugged, raw, and happy. A survivor.
One day's worth of sap isn't much to write home about for our measly 8 little taps, but for our family it's the tradition this time of year. It's a rite of passage for spring, our way of saying goodbye to winter and hello to warmer weather.
The ratio of sap to syrup is -- ready for this?-- 40:1. So it takes 40 gallons of sap to make 1 gallon of syrup. Our production is not a big one, but it's one that is made from these very hands and of course, thin air. The syrup could not be sweeter.

(Hey, moms, anybody twitter? How about http://www.twittermoms.com/? I've started a group there called "Outdoor Mamas" that is just waiting for you to join...)

Knit Purl Gurl said…
Karrie - you are the only other person I've ever seen who spells her name the way I do. I used to live in Wooster. I'm sure I've seen something you've written there! I can't believe I found your blog via Twittermoms!! :D
February 26, 2009 at 6:54 AM

Loren said…
Hi Karrie,
That's a pretty sappy story. (Sorry, I couldn't stop myself.) I didn't realize you had three little ones, like me! I thought you had two. They're all gorgeous.
February 26, 2009 at 7:33 PM