Whining in a Winter Wonderland 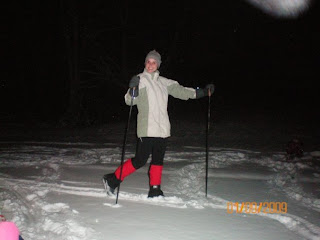 It’s just one more reason in a long list entitled “how I know I’m getting old.” Even though I promised myself I would never do it, I have started comparing my childhood to my children’s and saying things like “you don’t know just how good you have it,” and “back in my day…” and other such nonsense that pushes me one step closer to turning into my mother.
The latest cause for alarm is the wintery snow and cold that seems to come as a surprise every year, even though we all know it’s coming. And along with my proclamation of old age, I also find myself complaining about the cold (which I swear is getting colder) and the snow (which I’m sure is getting slipperier) and the winter in general (which I’m positive is getting longer, grayer, and darker.)
But winter is winter, and as sure as you always end up following the salt truck when you’re late for an appointment, kids are drawn to the snow with unimaginable forces.
I know. I was one of them, way back when.
But now I find myself being a grumpy old mom.
Consider this recent turn of events…
The snow had just started to fall, and the muddy grass was just barely covered. As the children sat pressed to the back door, staring at the nearly winter wonderland, they began asking to go out and play in, and I quote, “all the snow.”
(This is where I start getting old.) “Snow? You call this snow? Back in my day, we measured snow in FEET, not millimeters. This is nothing. We had trees that completely disappeared from December through March, and sometimes small pets. One year I totally forgot about my swingset because I didn’t see it for so long. That’s a snow. This is just cold fuzz.”
But still they begged and pleaded and eventually the snow continued to fall and the temperatures dropped enough to freeze the underlying mud and I caved. And thus began the long and arduous process of getting dressed to go outside and play in January. 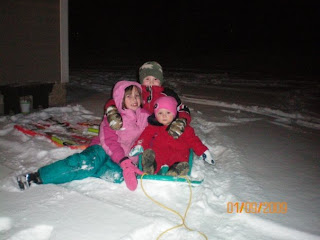 (Get ready—here I go again.) “When I was a kid, we didn’t have any of this fancy Gortex, breatheable, poly-something-athene, highfalutin snow clothes. Nope, we had to deal with what we had. We wore 4 pairs of sweatpants that we tucked into our dad’s socks, and a super high turtleneck to keep the steel-wool sweater from touching our skin. We’d cover up in our one piece snowsuits that were at least seven inches thick and I swear was made of absorbent sponge material. And there were no lined and waterproof boots with traction. Nosiree. We put plastic bread bags on our feet and slipped into our moon boots, which had totally flat bottoms and were made out of that same sponge material, which coincidentally also constructed our mittens. Yes, let me tell you, those were the good old days.”
(And then I get a little nutty…) “And while I’m at it, if we wanted to make a snowball, we actually had to pick up snow in our cold, wet hands and pack it into a ball. There were no snowball-making apparatuses. Packed it in tight as ice and made a real flying frozen weapon, not these wimpy things you guys have today. And sleds? What you have is outstanding, but they can’t beat the downhill fun that we had. We had two sleds: a Flexible Flyer which was totally uncontrollable and whose metal runners inevitably ripped your snowpants, and a garbage bag. That was it. And we liked it.”
By the time I had finished my crotchety rant that made me long for TVs with rabbit ears and rotary telephones, the kids were successfully outside on their slick plastic sleds in their watertight and warm gear.
“These are their days,” I thought to myself. I just hope I’m around long enough to hear how they whine to their own children when they turn…into…me.
Columns Family photos