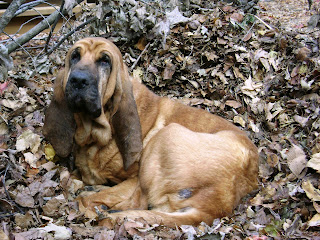 We didn’t really have a name picked out when we drove to pick up our new puppy. We tossed around a dozen or so while making the trip, but it wasn’t until the way home that we heard a song on the radio and looked at her wrinkly, droopy, and so-ugly-it’s-cute face and came up with it.
“Norma. Norma Jean. Norma Jean, the beauty queen.” And thus, she became a member of our family.
We never really planned on getting a bloodhound, it was just something that happened. We weren’t planning on using her for hunting or tracking, nor were we planning a Beverly Hillbillies reenactment. It must have been a calling from the universe that pointed us in the direction of what soon became our very own character dog.
And man, did this dog have character. She had gumption, determination, extreme laziness, and more odor than a single person could handle. She was a walking (and sleeping) factory of stink and personality.
More than that, Norma was a survivor. She lived through more than any one dog should. When just a pup, she slothfully slept at the top of our stairs that had a rail just high enough to allow a small puppy to fit underneath it. One yawning roll for dear Norma, and she fell the distance of one full flight of stairs, straight to the wooden floor below. Expecting certain death or handicap, I went running to her only to find that she whimpered a bit, then walked back upstairs and went back to sleep.
That’s the kind of dog Norma was. Once she knew she was OK, she simply went back to sleep.
Norma has also survived the birth of three children into the family, all of which she let crawl all over her while she slept and tug her tail and lift her ears which I’m pretty sure were the largest ears east of the Mississippi, possibly the world if not the universe. I think they should have had their own zip code, actually. 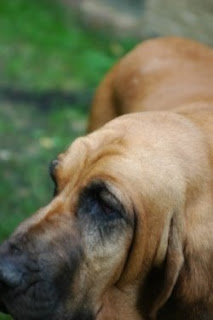 And then there was the time that Norma survived the wrath of my entire family after she ate the Honeybaked Ham that was keeping cool on the back patio one Christmas. After being reprimanded, she took off into the woods to hide and no doubt, nap.
Without being very picky, Norma has also eaten a deer carcass that she pulled out of the woods, multiple sticks, countless animal excrement, an entire unit of mouse poison, and undoubtedly many more obscure things, all of which didn’t have a single effect on her.
It seems the only thing that did have an effect on her was the cancer.
At first there were tumors here and there. We watched them grow everywhere, near her tail, on her neck. We had them removed one time, but more returned. As we watched them grow again, we watched our dog wither away. What was once nearly 100 pounds of red, drooling fur was now a mere 60 and the look in our eyes knew it was time to do the right thing.
We briefed the kids, telling them what was going to happen and why Norma wouldn’t be around anymore. Our oldest took it the hardest, but we did our best to pamper Norma on her last day. She had pork chops for dinner, and a big bowl of ice cream for dessert. She got more love that night then she’d received in a long time, and by the time the kids got up in the morning, she was gone.
We will bury her collar and a picture my daughter made for her in the woods where she was happiest.
We’re pretty sure she will rest because we know she was so very good at it, but we all pray that she rests in peace.
Columns Family photos