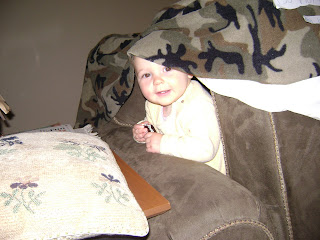 I can only sit on my couch between the hours of 9:00PM and 7:30AM. This is slightly distressing because it is a very comfortable couch and I do miss sitting on it.
Especially since I’ve been spending most of my time sitting IN it.
Every night when the kids go to bed, I collect the cushions and pillows from the couch, neatly reassemble them, and collect and fold the blankets that are draped here and there. And every morning, before I even get a chance to sit on my own couch, my son rips them all apart to construct his very own “survival fort” of the day that is just barely big enough for my head to clear.
Every cushion, pillow, and blanket available goes into building these dwellings. Once the walls and roof are erected, he packs his survival bag for the day which contains everything he believes, in his nearly-five-year-old wisdom, is necessary to survive in the wilderness. These items include (but are not limited to): plastic swords and guns, rope, string, gloves, binoculars, sticks, buffalo hides (really just a blanket, but we run with it), rubber lizards, and M&M’s.
These most necessary items are then usually stashed inside the workings of the couch to hide them from the so-called bad guys who are trying to invade our camp, and then naturally I find things such as whoopee cushions and rocks when I reassemble my beloved couch.
It all again reminds me of the old nursery rhyme about what little boys are made of. Actually, it wasn’t just the couch. It’s also the fact that my son has now started communicating in flatulent noises that he has perfected with his armpit, as in, “pfft! Pfft! Mom, can you help me tie my shoes?”
Snips and snails and puppy dog tails indeed.
But are boys always snips and snails? And what about girls? Are they always sugar and spice and all that’s nice?
I’m not so sure. I can think of many times during my own childhood that I put my parents (and that nursery rhyme) to the test. What instantly comes to mind is the time I tried to harness our black lab puppy so that she could pull me around the yard in my little wagon. Even though I had it all planned out, there was much barking, running, and flipping. And I think only a couple of bandages.
There is a consistent conversation among parents, an age-old question that never is resolved: which is easier to raise, girls or boys? Some will say that girls are easier, that they listen better and they are easier to potty train. Others will argue that boys are easier because they are less emotional and you don’t have to learn how to French braid and correctly operate a barrette. And still, many will dispute that boys may be more difficult as small children, but that girls take the prize by a mile when it comes to the teen years.
Being a mother of both genders, I’m not really sure how I feel. All of my children are equally wonderful and barbaric at times. But out of curiosity I turned the question to my own kids over dinner:
“If you were a mommy or daddy, do you think it would be easier to have sons or daughters?”
My daughter responds: “Girls! Girls aren’t so wild and they like to read books and color and don’t get so dirty and definitely don’t smell so bad.”
My son responds: “Boys. Boys are so much cooler than girls. Then we could play survival fort and make armpit toot noises all the time.”
The jury is still out.
Columns Family photos