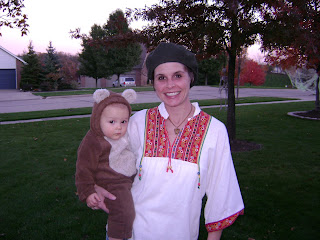 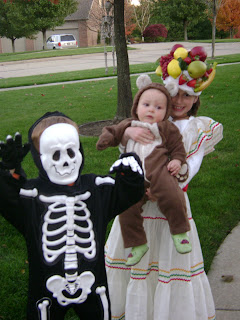 Knee-deep in glue trying to concoct a Carmen Miranda hat and stuffing candy corn in my face, I heard the inevitable question come out of the mouth of my kid:
“What is Halloween?”
“Uh, er, well, uh, it’s complicated.”
According to the History Channel, Halloween dates back to an ancient Celtic festival, over 2,000 years ago. They believed that November 1 was the first day of the dark winter, which they related to human death and the end of the bountiful summer harvest. So to commemorate this boundary between the worlds of life and death and keep the bad guys from slipping back to Earth and ruining the next year’s crops, they lit big fires to keep them away. Not only that, but they dressed up in costumes of animal skins and heads to supposedly help predict the future.
Later, when Christianity came along, the Pope of the day declared November 1 “All Saints Day” and later November 2 “All Souls Day” when people had parades and dressed up as angels and devils. Together, October 31 (when they used to scare away the dead), November 1 (when they used to honor saints) and November 2 (a holiday to honor the dead combined to be a giant festival called Hallomas. And somehow over the past thousand or so years, it has evolved into what we now do on October 31. Halloween.
(But really, if I tell my kids this they will be more scared and confused than if Linus really saw the Great Pumpkin rising out of the pumpkin patch.)
During my stint in higher education, I was very lucky to take a trip down under one fall, to where the kangaroos roam, the water goes down the toilet the other way, and where Halloween is as mysterious as it sounds. They were familiar with the holiday, but my g’day mates didn’t understand why I was so homesick for my haunted holiday.
And because I am a terrific pack rat, I still have the email saved that I wrote to him:
“Halloween? You don’t celebrate Halloween? You guys are really missing out. It’s the greatest holiday. You spend the entire month of October trying to decide just what to be and then make your mom crazy trying to put it all together at the last minute. Like the time in fifth grade when I decided to be a foot. I can still see my dad sweating out in the garage while we carved this giant foot out of carpet foam. My head was the big toe nail. It was awesome.
And the jack-o-lanterns! Nothing beats the feeling of cold pumpkin guts oozing through your fingers. Except maybe roasted pumpkin seeds with lots and lots of salt.
Then, on Halloween night, you get together with your friends and all meet at someone’s house with your empty plastic pumpkins and flashlights and run from house to house. You start off behaving and using the driveway and sidewalk, but soon enough the excitement builds and this is the one time you can run across everyone’s yard and your dad doesn’t yell at you.
After you’ve run the neighborhood and your voice is hoarse from yelling “trick or treat” at the top of your lungs (who needs doorbells?), you all head back to someone’s house. There, you sort through the goods and trade Tootsie Rolls for SweeTarts if you are me, and when you’ve had your fill of candy, a mom will serve powdered doughnuts, apple cider and popcorn and you all sit on the floor and watch The Legend of Sleepy Hallow and laugh at Ichabod Crane until you have to go home or you just fall asleep, surrounded in costume parts and candy wrappers.”
That right there is Halloween to me. Pagan ceremonies just don’t measure up to my own memories, and as much as I would like my kids to know the real history of the holiday, there is time for that. For now I’d rather just make the costumes, buy the doughnuts and cider and let them make their own history. As long as they give me their SweeTarts.
Note: That's me dressing as myself, circa 1993. Those are my old goofy clothes from high school. Yes, score one for me because they still fit, but take that point away because really, I wonder why I was such a social outcast...
Columns Family photos