Of bald eagles and cheerleaders 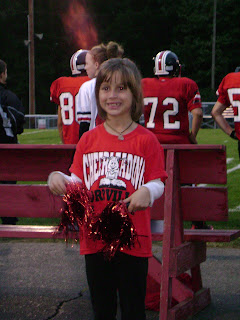 You’re never too old to learn something, right? Playing a child’s board game recently, I have learned two very interesting fact. For one, I never knew that a group of twelve or more cows is called a “flink.” (And I am anxious to add it to my next Scrabble game!) Secondly, I learned that the bald eagle when it is a young bird, looks nothing like a bald eagle.
Like most birds, they start off kind of funny looking with grayish down that covers their little bodies. At about three or four weeks, the little birdie begins to grow its secondary coat of gray down, and by the time the little dude (or dudette, as it may be) is around 6 weeks old, it will be nearly as large as its parents—but will just start growing in its black feathers. Not white, black.
In other words, no bald head.
The white feathers that grow on the head and the tail and that are so characteristic of bald eagles don’t grow in until sometime during the bird’s fourth year of life.
In other words, eagle kids don’t look anything like their parents.
This may not seem all that much of an important fact, but it’s something I can really relate to. Of my three children, my youngest two look very much like their father. My oldest daughter, however, looks very much like me. As if someone put me in the dryer too long. A real life Shrinky Dink. She has my same dark eyes and little nose, and she’s got the overly large two front teeth that she’ll eventually grow into, just as I did.
We both love to read and be outside. We both play the piano and love to dance. We both love garlic and can eat popcorn like nothing you’ve ever seen. So for the most part, we are very, very similar…but not completely.
It started with a simple flyer that came home in her first grade folder, advertising a cheerleading camp. Having grown up anti-cheerleader (and not because I didn’t like them, but because I split my time between the marching band and generally being a nerd), I was rather shocked when she showed some interest in attending.
“Mom, you get pom poms!” she said. “And a pizza party!”
And somehow, I felt at that moment that all of the energy I spent on raising my child as an intellectual artist (and, well, a nerd) was beat out by red puffy things and pizza. Like the little person that I always thought looked just like me really wasn’t that much like me after all.
Then came the time to make a good parenting decision, and we all know how hard it is to do the right thing. I swallowed my anti-cheerleader pride and signed the check for her to attend cheer camp.
After picking her up from her first session, her eyes were glowing with excitement and looking at her I had a flash to the future, seeing myself sitting week after week on a set of bleachers. The excitement carried over to the football game where the field was lined with little girls with little pom poms and loud screechy voices. She was hooked.
It’s hard being a parent because you tend to want your children to turn out to be like you…but even better. You instinctively want them to have all of your best traits, and carry on your legacy, whatever that may be. But sometimes you’ve just got to let them be who they really are and let them make their own choices, even if it’s not the choices you would make.
I just think of mama eagle way up in the nest, looking at her little black-headed eaglet. She must wonder if her baby will ever have her same matching white feathered head just as I wonder if my daughter will be a cheerleader or join the marching band. All we can do is let nature take its course and usually that course turns out pretty well which is good because really, there ain’t no stopping it.