Look out, folks—there was a well-timed spark 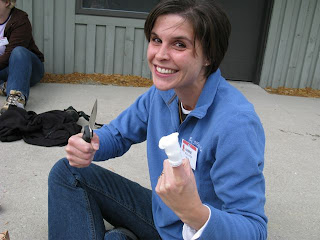 The little fire-making workshop came just at the right time because lately I’d been really getting bogged down by the daily doldrums of being a mom.
Stuff was starting to get to me. I’d practically break into a sweat about the smallest things, like I had totally lost perspective on what really matters in life. Not that fire really matters, but I found myself worrying about what the other moms would say if I fed my kids white bread and at what percentile the baby clocked in.
It was getting out of hand, and I knew it when, driving to my little fire-making workshop, I bombarded my husband with my apparently annoying life. And if I would have been a fly on the wall in my own conversation, I probably would have thrown up. “The weather these days is so annoying. The school rule is that it has to be 60 degrees before you are allowed out without a coat, and I know this because I got scolded for not wearing a coat one morning, and now it’s like 59 degrees when we leave for school and the kid have to carrying a coat around all day. It’s nuts! And by the way, how did you like that new bread I bought? I like that you can actually SEE the whole grains in there…”
Blecccch.
About once a year I venture away from my family for an empowering couple of days in the wilderness, or something like that. An annual program put on by the Department of Natural Resources called “Becoming an Ohio Outdoorswoman” is my latest love away from home—it’s a weekend of getting dirty and having fun. All sorts of adventurous classes are offered, everything from camp cooking to instinctive pistol shooting, and each and every one of them makes you feel, as a woman, just a little bit stronger, more confident, and ready to take on the world and the makers of the 60 degree rule.
This year, because of having a baby at home, I was only able to sneak away for one class and I begged the powers-that-be to just attend the one class that I had been dreaming about since I saw it happening the year before: primitive fire making. In the class, you actually make your own bow drill and through a series of carving and sweating, start a small fire without a match in sight.
It sounds terribly nerdy, but those who personally know me were not surprised to hear me babble about how excited I was about this class. I literally counted down the days. Then when the time finally came for the class to start, I left my family and walked into the room ready to become skilled in the ways of making fire. I had visions of myself screaming like Tom Hanks in Castaway when he finally starts that first spark. I am woman, hear me roar!
So when, not five minutes into carving my bow drill fire-making set I sliced the tip off of my left index finger with the brand new knife, I was pretty upset. Tearful, really. An entire year of waiting went down the drain with the gushing blood, and I spent the first half of the workshop holding my hand up in the air with my finger wrapped in gauze while everyone else sat there carving and all empowered.
Bleccccch again.
I could have easily spent the rest of the time wallowing in my own self-pity and band-aids, but eventually I realized that even though I was getting a late start with a handicap, I could still begin work on my bow drill. So using what fingers I had left, I started carving here and there. When the session ended, I took what I had started home and spent the rest of the weekend, in between motherly duties, carving and actually trying to create the a tiny spark. And let me tell you, it is hard work. Very hard.
But today after another round of attempting fire, I finally saw a tiny hot ember. It was very small and not even big enough to make an actual fire, but it was just the spark I needed to get me going, to empower myself and, should I need to, wave my bandaged finger at anyone scoffing at my kid’s sandwich.