You CAN write a column with a kid on your back 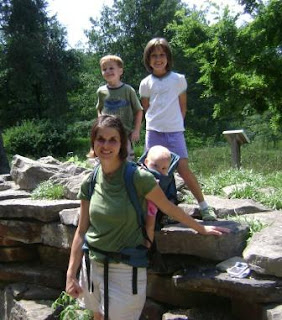 As a kid, I spent a lot of time driving to and from a family cottage sitting between my parents in the front seat of our wood-sided station wagon. The trip was two hours each way, which made for countless games of I Spy and the ABC game, as well as more than my fair share of country music.
Roger Miller must have been one of our favorites, because even now I can flip on a song I haven’t heard in over 20 years and still know every word. We must have worn that cassette tape out completely over the years, and if it still exists and runs, it would be a miracle.
One of Roger Miller’s most famous songs was a goofy little song that told about things that you couldn’t do, such as roller-skate in a buffalo herd, drive around with a tiger in your car, go fishing in a watermelon patch. Stuff like that that makes the average seven year old crack up and lose some orange punch out the nose.
There is one verse, however, that has become part of my parenting motto. “You can’t change film with a kid on your back.” Back when I was a kid, I never thought that one was very funny, like it was a joke I just didn’t get. I specifically remember telling my mom in a squeaky voice through buck teeth that that one just didn’t make any sense because surely she could change film while giving me a piggy back ride.
Her answer was simply the chorus of the song. “All you gotta do, is put your mind to it. Knuckle down, buckle down, do it do it do it.”
And that right there is the second part of my parenting motto.
With three kids, I always have at least one of them on my back. Sometimes it’s my oldest daughter asking me to color or play dolls with her (or earn her some Webkinz cash), sometimes it’s my son asking me to go out back into the woods and dig out a stump with him (he recently got a new shovel and an affinity for digging out stumps), but mostly it’s my baby girl just wanting her mommy’s undivided attention and to be held, tying up both of my arms so that ol’ Roger would be right, and I could never change film.
So in order to appease my baby, I totally ignore Roger and actually put my kid ON MY BACK. These fancy backpack contraptions nowadays have been a blessing for me, so much that I don’t know what I would do without it. With baby right in close to me, she’s completely happy and quiet and able to pull my hair whenever she pleases, which must be often because I think I’m starting to go bald in the back of my head. Not to mention that my back and arm muscles are starting to pop out in places where I forgot they ever existed.
But it’s all worth it for a contented baby and two free arms. There is not much I can’t do with my baby on board. I vacuum, cook, do laundry, shop, do yardwork, etc. I have even dubbed myself the modern day Sacajawea, who as we all know helped lead Lewis and Clark on their expedition with her baby strapped to her back.
Sometimes when I meet people who recognize me from this column the first thing they ask me is how I have time to sit and write with three kids. The truthful answer is that I don’t. But what I can do is put the baby in the backpack, park the laptop on the kitchen counter, and bounce around and type between coloring and stump-work and everything else.
Basically, Roger, I put the kid on my back and knuckle down, buckle down, do it, do it, do it. Just like you taught me so many years ago.