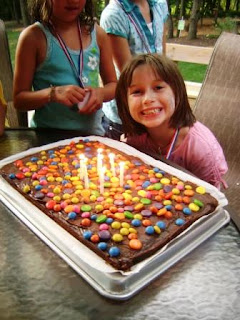 When the guests had left and the few remaining pieces of cake put away, I sat down and convinced myself I had thrown my daughter the perfect seventh birthday party, which is really saying something when your evening consisted of 16 kids and a bucket of water balloons…and you live to tell the tale.
Wanting to savor the last breath of childhood before I go from being “fun-mom” to “dork-mom” I decided to go hog wild with an old-fashioned birthday party. We had face painting and beading and lemonade and individual bags of popcorn. We had party games that involved the aforementioned water balloons, not to mention buckets of water, a full-on obstacle course and personalized medals when the games ended. We ate hotdogs and chocolate birthday cake that I made completely from scratch served with ice cream that I had pre-scooped into little muffin cups.
Looking back, it was so perfect it almost makes me sick.
The honest truth is that I don’t like perfect people. I don’t like the mom whose clothes are never wrinkled and stained like mine, and whose kids never leave the house without bed-head, also like mine. I don’t like the dad who never sweats when he’s mowing the lawn and who always has the video camera poised and ready while I fumble with my cell phone in an attempt to capture the Kodak moment in low resolution. I don’t like the parents who tell you, most likely in excess, that their perfect children are intelligent, beautiful, love to eat leafy green vegetables, can write in three languages at age four, never whine, and organize their own sock drawers.
I also don’t like the mom who throws a flawless birthday party, which has the possibility of making me sound like a hypocrite. But I can assure even the greatest of skeptics that when it comes to birthday parties, I am not a hypocrite. No way, no how.
And so it is with great pleasure that I provide for any of those skeptics, my very own Perfect Party Disclaimer:
I hereby declare that while my daughter’s birthday party may have appeared to go off without a hitch, I honestly spent the previous 36 hours in a total mad frenzy of yelling and frosting, all while running around in a haze of my own body odor.
The night before I laid awake in bed making numerous to-do lists, all of which I forgot by morning because I was so tired from laying awake making lists all night long. My tiredness was also compounded by my lack of time management skills, which were also interrupted for a while because my daughter sprayed air freshener in her eye while she no doubt tried to make our home smell nice for her friends.
The baking of the infamous from-scratch cake required not one, but two additional emergency trips to the grocery store for forgotten ingredients. And while filling water balloons, I broke more than I filled and gave my laundry room walls a full and accidental washing.
During the day I kind of forgot to feed my family breakfast until 10:30 and then realized at 4:00 that I never fed them lunch. And I also was known to scream things such as, “I’ve never seen such lazy children!” and “am I going to have to cancel this party?” and “that’s it, no one is ever having another birthday party ever ever again or you will do it all yourself!”
All in all, there wasn’t much of anything that was flawless except maybe the look on my daughter’s face when the party ended.
“Did you like your party?” I asked.
“I didn’t like it. I looovvved it!” she replied.
Score one for the fun-mom.