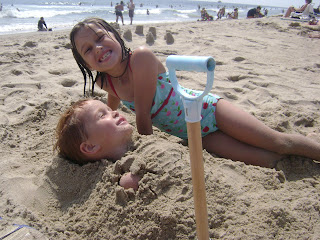 We recently went on vacation. A traditional family vacation, which is something out of the ordinary for us.
We went to the beach. Not just any beach, a big, crowded beach. There were as many people as there were sand grains and I admit at first I was devastated.
"I can't believe we spent all this money to be with so many people." Obviously I'm not a big-city girl...
I said to Ryan during one of our walks between blankets and umbrellas, "it's strange how the ocean and the beach is such a part of nature, how it's a natural wonder, and yet people don't really consider it like that. It's not like going to a forest or a national park, but it's still the same thing-- people really loving to be out in nature."
And even though I was sun weary and sand worn, I think I made a lot of sense with that one. Sure, the thousands of beach-goers weren't thinking they were at one with nature...but they were. Each and every one-- watching the pattern of the waves, sculpting sand castles, feeling the warmth of the sun and the stick of the sea salt -- including us.