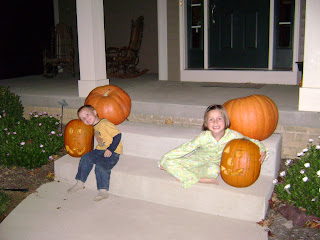 ntil late November, but you really couldn’t tell it was a pumpkin anymore.
I love pumpkins. They are an essential part of my favorite season, which lasts from about the second week in October until the freezing rains start knocking down the corn stalks.
I love all sorts and sizes of pumpkins. I love the little tiny ones that you set all over your house for decoration to the great big deformed ones we rush to see at the county fair, and everything in between.
As a kid, we carved pumpkins every year. And this was before they had those fancy and safe pumpkin carving knives, so each and every October we all risked our fingers by using the biggest and sharpest knives we had, just like everyone else. I figure the guy who invented those fancy safety carving knives only had two fingers left on each hand but still loved his pumpkins.
But for all of the risk taking, it was always fun. We slung pumpkin goo around like we wouldn’t have to wash the sticky orange glue from off the walls and ourselves. And for a time in my ‘tween years, I even remember smearing the stuff on my face because I heard it made for radiant skin.
Then we sat for what seemed like hours, picking every last piece of guts off every last pumpkin seed, and we’d roast them and load them with salt and eat them all in one sitting.
It was good, not-so-clean, Halloween tradition, and I thank my parents for each and every memory.
But now, with my own kids, I find myself turning into a mean pumpkin persecutor. As much as I loved carving pumpkins, I utterly and completely dread the time spent doing it with my kids. It is an undertaking of massive proportions—and one I honestly don’t see myself having the patience for.
First the buying of the pumpkins, then the washing of the pumpkins. And because my children are still small enough not to poke out their eyes (or the eyes of their siblings) with even the safest of pumpkin carving tools, my husband and I end up doing all of the work.
And as if that wasn’t enough, after two scoops of pumpkin guts, someone will predictably declare that he or she is done with the pumpkin and, completely covered in the those two scoops, will want to go play with something else. Then, my husband (who is really not so particular about the cleaning of the seeds) leaves me and me alone to gather the seeds for roasting.
“And who will EAT the seeds?” said the Little Red Hen, who incidentally has a fantastic recipe for sweet and spicy seeds that she just can’t live without.
When it is all said and done, I am pumpkin weary and stained orange up to my elbows. But still, I haul their faces with the token triangle eyes and toothy smiles out to the front porch, sprinkle their insides with cinnamon, and light the tea lights.
We all go out and oooh and ahhh over the glory of the jack-o-lantern until someone asks for candy and we all go back in, leaving our new pumpkin friends to sit and gather mold and decompose until they are shrunken heads and have stained our front steps with their rot, just like they’re supposed to do.
Hey, you just can’t beat tradition.