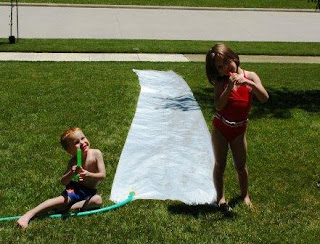 It’s been quite a few years since I said, “man, am I thirsty. Pass the hose, would ya?”
But that doesn’t stop me from getting a little nostalgic about my childhood days, and all of the risky and dangerous stuff we used to do.
How we ever survived without getting some horrible digestive disease from the garden hose, I’ll never know. And why we even liked the taste of the rubbery water is beyond me—it must have just been extra cold and didn’t require us to take off our shoes before going in the house. The point is that we actually drank the water and didn’t end up green and in bed for days. What daredevils we were back then!
And if it was super hot outside, mom would come out and set up some summer time water fun. First she’d slather herself in coconut oil to attract the sun’s rays, and then she’d hook up the sprinkler.
And everyone in my generation (or at least in my neighborhood) had one of two sprinklers—either the one that looked like the worms wiggling around in a mad, watery frenzy, or the Fun Fountain, Wham-O toys, circa 1977.
We had the Fun Fountain, which was nothing more than the head of a clown wearing a pointy hat made of hard plastic. And out of the top of the clown’s head shot a stream of water so powerful, that the hard plastic pointy hat was suspended what seemed like twenty feet in the air. And the “fun” part of this fountain was running through that stream of water…and surviving without a) breaking the stream so long that the hard plastic pointy hat knocked you unconscious or b)sticking your eye into the potent stream of water, thereby blinding you for days.
I’m telling you, HOURS of fun. And we really did learn to run fast. It was an excellent training tool.
And on super hot days when dad was home (because only he was brave enough to unfold the tarp in the back of the garage), he’d set up the classic and the original slip and slide.
There were no fluffy, padded slides like you see today. There were no super efficient watering systems. There were no pools at the end to stop you.
It was just a big, wide blue tarp we laid out in the backyard. And if we were lucky, mom let us have the last of the bottle of dish soap and we’d give the tarp a good squirt of lemony fresh before turning on the hose at the top. The fun part of this backyard toy was a) learning to stop before hitting the little metal eyelets on the edge of the tarp and b) having all the fun you could have before the tarp tore up your skin or the soap gave you a rash.
At the risk of sounding like an “old” person who says that things were better in their day, when they walked to school uphill both ways in the snow without any shoes, I’m afraid to say that those indeed were the good old days.
The good old days were dangerous, but they had that sort of spontaneous create-your-own-fun that I can only hope my own kids can learn to appreciate.
The word on the Internet is that the Fun Fountain was re-made in the early 1980s due to some lawsuits about kids getting their eyes put out by the merciless stream of water. They had to cut back that stream, so that the hat only went up a few feet. Children everywhere were reduced to getting wet only up to their knees, which probably means they had to drink extra water from the hose, just to stay cool.